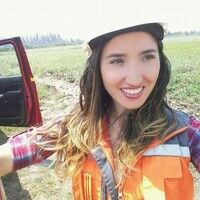 Bárbara Salgado Seguel has executed and managed a variety of surveying and engineering projects in support of mining, commercial development, public works, and utilities. Her home country of Chile has undergone an unprecedented boom over the past several decades, but also several devastating natural disasters. The engineering and surveying communities have certainly risen to the dual challenges of rebuilding while trying to stay ahead of rapid growth. Salgado Seguel is described as one of a new wave of can-do survey engineers, applying new technologies to both old and new geospatial challenges, and as a splendid example of 21st century Chilean spirit and resilience.

Salgado Seguel studied surveying engineering at the University of Santiago. One of her first job postings was performing surveying computations for tunnel monitoring for a metropolitan rail system. She was then placed as surveyor in charge of topographic surveying to support the design and construction of large storage domes at one of Chile’s major ports. Her current role is as a project manager of the geospatial elements of projects for a large multi-disciplined engineering and development concern.