We have all heard it, most likely have even said it. I have. And we probably meant it as a negative, implying sloppy work.

However, researching the origin of the saying revealed that it was born during World War II and meant excellence, as in: if something was “good enough for government work,” it could pass the most rigorous of standards. When and how it morphed to the opposite is unclear.

Personally, I can tell when and how it morphed back to its original meaning for me.

I worked in the profit-driven, private sector for 16 years, during the last six of which I was using my California Land Surveyor stamp almost daily, but then I made the jump to the public sector. This was not a blind jump off of a sinking ship, but rather an informed and calculated change, fostered by a former mentor in the private sector.

My mentor, Jon, was the least likely government-employee-type I could have ever imagined, although my perception was far different than reality as I later learned. He was perhaps the best surveyor I ever had the pleasure to work with, but he was outspoken, took no crap, was a huge prankster, and certainly didn’t “go along to get along.” So I was floored when, at the age of nearly 60, he announced he was leaving the company to join the state ranks.

His departure was an important chapter in my professional growth as I no longer had him as my “safety net” to bounce my boundary analysis off of. I now had to make them and own them. I didn’t welcome the forced maturity at the time, but I did grow to appreciate it much later.

Not long after Jon started his new position, he began to contact me on a semi-frequent basis to let me know how it was going and to plant the recruitment seed.

Jon was meticulous. His documentation of his work was second to none. His attention to detail and ability to think of all of the “what ifs” was superb. But, he was rarely allowed the time to do things to his standards in the private sector. The budget and schedule simply didn’t allow it. No sending the crew back out to do another monument search or go out himself to scour. Nope, just had to make do with what he had, deliver a product, and move on. It always bothered him. It bothered me too, but I was too young and nonassertive to make an issue of it.

The first mantra I remember from Jon’s calls had the undertone of, “For the first time, I get to do things right.” He would tell me of licensed party chiefs with decades of experience doing the field recon. He told me, “If they say the monument, or evidence thereof, was not found, it is not there. If they found it, it is properly described in detailed notes.” The methods used to tie it left no room for error. No “one angle, one distance” from an open ended traverse. Nobody breathing down his neck asking him to cut corners, yet him taking the liability by affixing his seal and signature. This continued for almost three years.

I finally had enough with my job, and with Jon’s assistance I navigated the state hiring-gauntlet. When I was offered the right job, I accepted, even though I was very apprehensive about the change. The company I worked for had had a “family” feel to it, but I knew where I had been, and because of Jon, I had a pretty good idea of where I was going.

I will never forget telling my boss that I had accepted a job with the state. I didn’t know what I was going to do if he counteroffered. Instead, he said, “Good luck. We can’t compete with the &@#*ing government.” Turns out, he was right.

My first assignment was in the office, leading a team doing the mapping and deed preparation for a 130-mile-long pipeline project. Jon was leading another team on the same project. We were together again. I quickly came to realize that my stereotypical perceptions of “state workers” was almost entirely incorrect, at least based on the ones I was working with. It didn’t take long before I was interacting with those same seasoned, licensed party chiefs, going over my research packages, then meeting with them again when they returned with my deliverables. Wow, just like Jon said.

For me, there were two distinct moments that changed my definition of “close enough for government work” back to its origin.

The first was when a team was assembled to do a “3-way check” of a legal description (the whole deed, actually) and the associated map for a parcel to be acquired. I had no clue what this odd-sounding ritual might be.

In the private sector, especially those last three years, I did the boundary analysis and calculations, wrote the descriptions, prepared the plats, and signed and sealed both. Hundreds of times. The only other eyes that ever saw either product were those of the person who typed the description for me, who had zero surveying experience. There was no independent check of any kind before the documents went out the door.

So this day, the team brought the map, the deed, and the job binder (which included the calculations, the title report, and all of the supporting documents) into a conference room of all surveyors, either licensed or in training. We commenced to methodically perform the 3-way check. The legal description was read. The map and calculations were followed to make sure all agreed. Redlines were performed in real time. When there was a call for a recorded document or map in the deed, the binder was consulted to make sure it was the correct document and that the recording information was correct. When done, all errors, omissions, or disagreements had been identified and addressed. The corrections were made, and another 3-way check performed.

When complete agreement was achieved, the documents were ready for signatures and seals. I never worried about a single thing I sealed and signed from that day forward. But I sure started to worry and wonder about the hundreds I had done with a “no-way” check in the past. 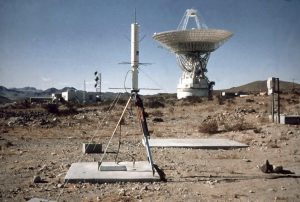 The second moment that changed my mind was in the field, locating a property corner. I watched in amazement as the corner was double tied from two different traverse points. Multiple sets of angles were turned at each; multiple distance checks were performed.

I asked, “Why?” I was told, “We are 350 miles from the office. When we take this home we have to know it is correct. These are the methods and procedures we employ to ensure that.”

I later learned that all the instruments were regularly checked and adjusted, including tribrachs and rods, and annually sent in for maintenance and calibration. I can’t recall an instrument going to the shop in the private sector unless it was broken. 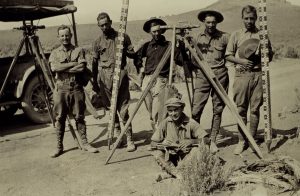 Level crew with the tools of the trade: Credit: C&GS Season’s Report during 1920.

In the 25 years since, I have witnessed countless similar examples of “government work.” I have been intimately involved with some of the largest height modernization surveys in the country, all of which were “bluebooked” by the National Geodetic Survey. Apparently, they met the standard of being “close enough for government work.”

I can proudly say that everything I have done as a professional land surveyor has met that standard over those 25 years. And it makes me smile to know that the original intent of the phrase is exactly what I know it to be.