On June 25th, I lost my rodman, who was also my brother, best friend, and only sibling, at the much-too-young age of 57. He went to sleep and didn’t wake up. Turns out he had been ignoring symptoms of heart trouble for some time, and, unfortunately, it was a fatal mistake.

My weeks since have been filled with many emotions, thoughts, and memories, including of the times we spent together surveying. He was a computer programmer, not a surveyor, but he was always more than willing to help his brother when the opportunity arose. Although I haven’t done any surveying work in a private capacity in many years, one survey he helped me on still stands out, which I will share with you all here.

About 15 years ago, I was hired by an attorney to perform a survey that involved locating an access easement adjacent to a boundary between two five-acre parcels created by a subdivision map many years prior. The opposing party was the neighbor, who was denying use of the easement to my client’s client.

My task was to locate the common boundary, then mark the extents of the easement on the ground, document, and be prepared to serve as needed through the litigation process.

Before going to the site, the attorney warned me that the neighbor was likely to be contentious but seemed to be much more bark than bite. Still, I wanted to be careful and not incite him, especially since this was a rural location where help was many miles away.

My brother joined me for that day of field work. We arrived early in the morning and began to start monument recovery around the cul-de-sac and down the rural gravel road. We hadn’t been there 10 minutes before a car came racing down the neighbor’s driveway. “Here we go,” was my first thought.

Sure enough, the neighbor stopped and demanded to know who I was, what I was doing there, and who I was working for. I introduced myself, gave him my business card, showed him my pocket surveyor license card, and told him simply that I had been hired to perform a boundary survey.

He got his hackle up and said, “Well, I know I didn’t hire you, so that means you’re working for them people [pointing towards the adjoining parcel]. That means you’re going to find in their favor, but let me tell you, Sonny, I’ll beat your ass in court, so you just survey away.”

I told him that it never mattered who my client was with regards to my findings. The answer was the answer, regardless of who it favored. He shrugged and drove out towards town.

My brother and I recovered several original subdivision corners, and I set up in the center of the cul-de-sac bulb and started tying a few out. I had stopped to do some calculations to find one front corner that was buried under fill when the neighbor came back home. He barked at me some more, and I just smiled and kept pecking away on my 41-CX on the hood of the truck. A minute or so later I looked up the hill and saw that he had pulled a lawn chair out so he could sit above and watch us. I didn’t see a firearm, so I told my brother not to worry. My brother had a very easy way about him, so he didn’t get too excited about such things anyway.

I computed the angle and distance to the buried corner and put my brother on the spot. I got a faint signal with my locator, grabbed the digging tools, and went to work. The original grade was about four feet under the top of the fill, so rather than digging straight down, I dug a trench towards the corner from the toe of the fill. It was tough going, with lots of rock, so there was a lot of clanging going on.

As I was nearing exposing the corner, here came the neighbor again. He jumped out of his car and walked over to our location. I didn’t even look up.

He said something like, “Sounds like you’re doing some digging,” to which I replied, “Yes I am. Are you here to help me?” 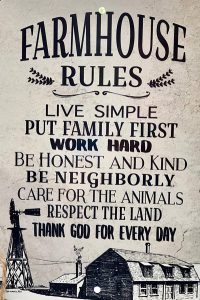 He retorted, “I wouldn’t help them people get into Hell,” and turned to walk off.

Without looking up I said, “Well, that’s not very neighborly of you,” and he just sort of grunted, got in his car, and drove back up to the house.

A short time later, his wife came walking down the hill with a couple of dogs. She stopped to say hello and was really quite pleasant. It was clear that she didn’t hold the same animosity over this boundary dispute that her husband did.

As we chatted, he yelled down, “Don’t talk to them. They’re the ones who said we ain’t very neighborly.” She just rolled her eyes and walked down the gravel road with her dogs.

The crusty old guy came down a couple more times during the day. It seemed that each time he had armed himself with some new surveying terms that he had just pulled off the internet. I did my best not to engage him without totally ignoring him. Each time he left I chuckled, as did my brother. My brother knew just enough about surveying to see the humor in his antics.

We completed the field work, took pictures of the easement stakes, boxed up, and were preparing to depart, when down the hill he came, one last time. He got out of his car and started just where he began that morning.

“Looks like you’re all done, and now I know I’ll beat your ass in court.”

He said, “Because you have no idea what you’re doing. I watched you all day, and not one single time did you ever check your magnetic declination.”

I just smiled and said, “You are absolutely correct, I never did do that. You got me on that one.”

He gave me a smug look of victory, and off he went.

My brother and I chuckled about the interactions with that fellow all the way home, and many times since that day. There never was an opportunity to meet him again in the courtroom. Once my report was delivered to his attorney via my client, they folded. I guess my magnetic declination omission wasn’t as critical as someone thought.

Now I will remember that day, and many others, without being able to talk to my brother about the memories, but he will always be with me. Although he never fully understood the fundamentals beneath the art and science of land surveying, his analytical mind and willingness to be helpful made him the perfect rodman for me. He knew how to keep a rod plumb, carry equipment, and follow directions. He always showed up prepared, dressed properly, and ready for a new adventure. He rarely would accept pay for his efforts, but I always found a way to compensate him, whether through a nice meal, a round of golf, or simply returning the favor with my labor.

Life is precious, and not another minute is guaranteed. Go live it, hug your family and friends, and tell them that you love them. Don’t neglect your health. And be neighborly.