History tells us the journey for female surveyors began with Alice Fletcher in the late 1800s. Fletcher was a social scientist who tried to integrate Native Americans into the European culture spreading across America.

After learning that Native Americans feared being banished to designated Indian Territory, she fought for their right to have legal titles to their own farms. By the mid-1880s Fletcher had allotted 75,931 acres in 954 allotments to 1,194 Native Americans from the Omaha people, establishing herself in the history books as the first American female surveyor.

In 1922, Irene Barclay became the first British woman to qualify as a certified surveyor. After the Sex Disqualification Act of 1919 was passed in Europe to protect women from discrimination, Barclay stepped through that open door and served as a surveyor for 50 years. She helped implement improvements to enhance living conditions in London and across the UK. She helped build homes, schools, recreational centers, and commercial properties for the underprivileged.

The two women opened doors for women to pursue a career in the land surveying profession, although since their pioneering work, progress has been slow.

There’s nothing about land surveying that poses a greater challenge for women than men, at least not aside from outdated ideas and traditions. Men still dominate the industry, but that gives women one more opportunity to break through an unnecessary barrier and build a profitable, rewarding career. 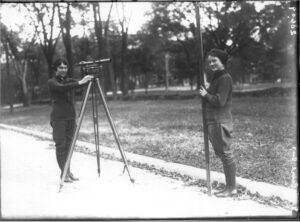 Following Fletcher and Barclay, women likely entered the field during times of war, but there is little record of the number. There’s also no sure way of knowing how many women retained land surveying jobs when men returned from service. As with Rosie the Riveter, many may have given up their jobs to return to homemaking.

Today, we know there is a shortage of educated, trained, and skilled land surveyors in America and throughout the world. That gives women an opportunity. Those studying now in preparation for entering the industry could command both a better chance at landing a job as well as better pay.

Surveyor recruiting firm HD Surveyors says many of the top positions are still held by men, but that will change as women make up a larger percentage of qualified professionals.

Stacy Jacobs, PLS, wrote in xyHt last year: “As I approach my 30th year in the land surveying industry, to say that I have seen changes in the diversity over the last three decades would be misleading. Today I work with fewer females than I ever have. I find myself reflecting on my career path and thinking about what the future may hold for our industry. Sure, women are making strides in surveying and other STEM industries, but have our strides been big enough?”

Although land surveying is more and more accepting of women, there are still barriers. The fact that people throughout the industry still use a word such as “accepting” indicates there’s a problem. But with every new female land surveyor, that problem becomes less and less.

One of the biggest barriers to opportunities for women in surveying is a lack of understanding about the industry. In Fletcher’s time land surveying was going out and defining boundaries in the field. Today it’s much more and includes emerging computer technologies, flying drones and mapping with geographic information systems to add helpful data to maps that contain layers beyond streets and boundaries.

Yes, there are still obstacles that exist for women, but a good education, time, and energy mean women can surmount those obstacles and not see them as stopping points impossible to get around.

Women have worked hard for generations to gain ground in land surveying. There’s no time to slow down now. Opportunities exist for the taking as long as you’re willing to commit. Some people may still offer resistance to a woman in the field, but more and more, there’s acceptance and even a reward for women who have the much-needed skills and experience.