When I first started working in the survey profession, many new activities I quickly learned and others took years to perfect. The two pieces of advice I heard most often in the beginning of my training were: dig the hole a little wider and deeper, and hold the dumb end of the chain.

The L.S. I worked with, named Jerry, was an excellent trainer, and he made certain that I became skilled at completing a task before he would allow me to do anything on my own. He accomplished this by having me look over his shoulder, and he was always asking a thousand questions (or it at least seemed like it was that many). Then he would allow me to try the task and again ask me a lot of questions. It was his way of training and making sure that I was ready to work without him being there.

My background had been as a manufacturing engineer, so I had solid math skills. One day when we were working in the field, he was doing calculations for the next corner we were going to search for. The math he was doing was looked familiar so I asked him what he was trying to figure out. He said he was computing the “inverse” to next corner. To which I replied, “You mean the angle and the distance.” He looked up and said, “No, the inverse. You’re a surveyor now, not an engineer.” 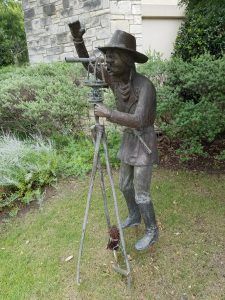 This art installation, “Military Surveyor,” is in the sculpture park of Frisco, Texas. Credit: Kevin Reed.

At first, I just couldn’t understand how he could find those section corners in middle of a field or in the middle of the woods. Some of the corners, he told me later, had not been recovered for years. I can remember as we walked to some of those corners that I keep asking myself, “Why don’t we just walk around the swamp; wouldn’t be a lot easier?” That’s when I started to understand the term, “Walk in the steps of the original surveyor.” I was also starting to understand why he spent all that time in the office reading old survey notes, maps, and drawings.

Remember when retracing a survey: ALWAYS WALK IN THE FOOTSTEPS OF THE ORIGINAL SURVEYOR. That is such a simple statement, yet it has a far-reaching meaning. You must correct your chain and compass to his or her chain and compass, not theirs to yours. If the original surveyor did not record the declination that was used, it is possible to recreate it by using the annual change from the isogonic chart. Try to locate the chart that was in use at the time of the original survey and use the declination given.

It really hit me when several years later I was working with a summer employee doing my own corner search. The two of us had walked about a half mile into the woods to GPS a corner. After we found the corner he asked if I had ever been to this corner before, and I said no. I didn’t tell him that I saw an RP plate on one of the trees as we got close. While we were checking the corners RPs, the summer worker asked if I smelled out the corner. I told him it was a great trainer I had who got us here.

Over the years I have been a speaker at numerous survey conventions. Every time I find myself in a group of older surveyors, the subject of the lack of qualified surveyors always comes up. They normally repeat the same complaint: The schools just don’t train them before they graduate. I always upset a few of them when I ask, “Who have you trained lately?” Or “Who did you offer an internship to last year?”

All I can say is thank you Jerry for taking me under your wing and making me into a surveyor whom the local community looks up to. I’m sure each one of you have someone whom you look up to who helped make you into the skilled professional you are today.

We need to train our young surveyors how to work in the field. They can’t teach everything in school. They need to be able to find that worn “X” on a rock face or be able to tell which tree has an over grown RP. The only way young surveyors will learn these type of skills is in the field with you, a skilled trainer.

The image above is the art installation, “Military Surveyor,” in the sculpture park of Frisco, Texas.  Credit: Kevin Reed.