The popular surveying software is evolving to support modern operating systems and dozens of field instrument platforms, and it’s making a lot of friends along the way.

Some of the most ubiquitous and pervasive elements of our lives, like smart phones, the web, GPS, and even those omnipresent coffee chains, began as radical ideas. MicroSurvey’s history has been a series of bold moves, and while they weren’t radical per se individually, together they represent a progressive business model.

I recently visited MicroSurvey’s HQ in Kelowna, British Columbia, a few days before the launch of their field software for Android platforms. That’s where I discovered how much the famed Canadian kindness extends to their business model and practices.

MicroSurvey has been developing and providing surveying software since 1985: desktop, field (e.g. FieldGenius), forensics, analysis (e.g. STAR*NET and more, see sidebar). Because of this, professionals recognize the company name and individual product lines.

MicroSurvey has positioned itself as a leading third-party surveying software provider, and the launch of its compatibility with Android platforms (and soon others, like iOS) puts it in the “catbird seat” to serve the current 4th Wave of surveying and geospatial field instrumentation. (For what I mean by “fourth wave,” see this month’s editorial.)

It seems that everyone I spoke with at MicroSurvey has a surveying or related background, from the general manager down through marketing, R&D, production, and support. Senior development architect Earl Dzus graduated from the survey program at BCIT (Vancouver), spent years “in the bush” surveying all over the world, and has over 20 years of experience programming surveying software.

“We did not simply try to port over our current software code; we programmed from scratch, new code. We did not want to end up with 18 months of spaghetti code trying to migrate the old,” Dzus said.

“We did this in a way that would make it easier to expand to other mobile platforms [in the near future], like iOS and Windows. This also allowed us to add features our users have been asking for but were difficult or impractical to develop for the [legacy platforms and operating systems].”

Fosse has a geology background, having worked extensively in structural and hydro geology, as well as development in integrating software with instrumentation and sensors. “We wanted the same look and feel, but also wanted to make improvements, based on decades of feedback from surveyors, that we are now able to [accommodate] with the new OS and [increased processing power of] today’s mobile devices.”

Features made possible by this modernization include better menu and display options. It is much easier to sync data and display views—data panels can be easily moved aside, and there are no more popup displays.

General manager Jason Poitras said that one of the goals achieved is “less clicks, more productivity.” I agree. I’ve always felt that FieldGenius did a good job on menu navigation, but the new operational flow is simple and intuitive.

Poitras said that the first version is for GNSS, with optical support coming soon (likely early 2020). An ambitious goal of updates about every six weeks is on track.

One visible change is the ability to add reference backgrounds like Google, Bing, and Open Streets. You can also fade back images/maps to make your data stand out. There are options in the works for offline maps/images (as surveyors often work where the cloud doesn’t). Creating, editing, and deleting new survey codes is simpler, and if you import survey data with new codes, those are loaded into the library automatically.

The symbology of points and linework is a function of status: different for design, staked, and even multiple shots on the same point. Multiple shots, such as a survey would do to gauge quality of GNSS observations for a control point, can be viewed as a group in an expandable panel where you can look for outliers and average. There is an improved workflow for multiple line-stringing field methods.

With the sync between multiple panels, for instance, the data, map, and observation panels for GNSS stakeout, workflows have been improved. This updated staking workflow is one of the coolest new features: pick points for stakeout are on the map or list, GNSS quality indicators are displayed, staking directions are displayed, and the color changes when you are within your staking tolerance. This is similar to several modern field packages, but I think they did a particularly good job.

During the visit to MicroSurvey’s HQ, we talked Poitras into doing an impromptu video announcement on LinkedIn of the new Android version; he did great job. And we felt honored as that was a few days before the official announcement.

I asked Poitras if we could grab a rover and head for the field; he was quite happy to oblige as it was a stunningly beautiful late-summer Kelowna day, and surveyors seem like to hit the field no matter how long they’ve been office bound.

Poitras is from St-Georges, Manitoba, studied surveying at Red River College in Winnipeg, and worked in the field for several years. But his real interest was in CAD, surveying, and civil software; for example, he did a lot of customization with AutoLISP. Looking at the MicroSurvey website one day he noticed a jobs section; that lead to roles in sales, training, product development, operations management, and he became general manager when founder Darcy Detlor retired in 2014. 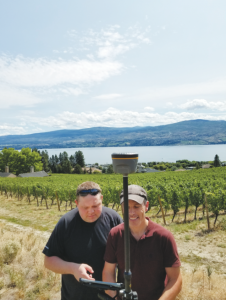 MicroSurvey’s Marc Veinotte (left) and Jason Poitras test the new Android version of FieldGenius with a South G1 GNSS rover in Kelowna, BC, home of MicroSurvey.

We found a lot of rovers to choose from. A storage room at their HQ has dozens of GNSS rovers of many makes and models. Sales and OEM manager Marc Veinotte says that FieldGenius supports “23 brands and counting. Some brands like South have half a dozen sub-brands for different markets and regions.” MicroSurvey has become quite the master of integrating drivers for GNSS and total stations.

Veinotte also hails from a related background, a civil engineering technologist who found the software and data side more interesting than design. One of his roles that he enjoys a lot is working with many manufacturers globally. FieldGenius, of course, supports many models in the Leica Geosystems and GeoMax lines, as MicroSurvey was acquired by Hexagon in 2012 (such as the Leica GS14, GS15, GS16, and GS18T with tilt support in the works). It also supports unrelated brands like CHC, South, Tersus, etc.

I had to ask an obvious question: Does Hexagon mind that MicroSurvey is essentially enabling folks to buy different gear? Poitras said that Hexagon recognizes that customers have varying regional and business value propositions and that they will be buying other gear anyhow, but at least by providing the software they are still in the transaction. Hexagon affords MicroSurvey great resources yet grants a high degree of independence—there are few prying eyes from the corporate offices.

We grabbed a South Galaxy 1 and headed out to a nearby road right of way (overlooking one of the many local vineyards). In the new FieldGenius, Poitras connected via NTRIP to an RTN, and we had four-constellation GNSS observations flowing instantly. Precisions were excellent. (This has since prompted me to visit South and try out their gear; a follow-up article is coming soon).

It looked to be a solid field software package. MicroSurvey relies heavily on a network of users for feedback. Rather than releasing a “beta” in the old sense of the word, the new version is in early release, with many of the MicroSurvey Technology Integration Group network of users trying it out.

It can run on nearly any kind of Android mobile device, from data controllers to ruggedized tablets, even phones. The new mobile environment enables new ways to do licensing. For instance, say you drop your tablet; you could go a local store, buy a cheap replacement, log into your account online, deactivate the software for the old one, activate for the new tablet, and be up and running in no time—without having to call MicroSurvey.

I noted that a lot of the same fourth-wave manufacturers are going Android with their own field software. So why do they choose to co-market FieldGenius? As MicroSurvey (and several of these other equipment manufacturers) have told me, there are distinct regional preferences in software.

A parting thought came to me at the end of my visit: Arizona-based GNSS developer Bad Elf (read our 2017 profile) has been making popular mapping-grade peripherals for many years, and I mentioned they were about to launch their first survey-grade rover (the Flex) but did not yet have survey software. This seemed like a good match, so I introduced them to Bad Elf.

Android FieldGenius launched on September 7, 2019, and just over a month later, the Bad Elf Flex was ready for a test drive operated by the new FieldGenius. You can read about that test drive in this issue. Read about our Flex test drive.

Okay, maybe I’m stereotyping Canadians a bit when I say that it seems like MicroSurvey wants to be everybody’s friend. I’ve been calling their support line for years, and the folks at their HQ are every bit as friendly as the support staff. They sure seem to be succeeding in forging partnerships and friendships globally in the world of surveyors and equipment suppliers.

FieldGenius was redesigned for the Android version with mobile features. In this example, an updated stakeout work flow was tested on the paint stripes in the HQ parking lot. 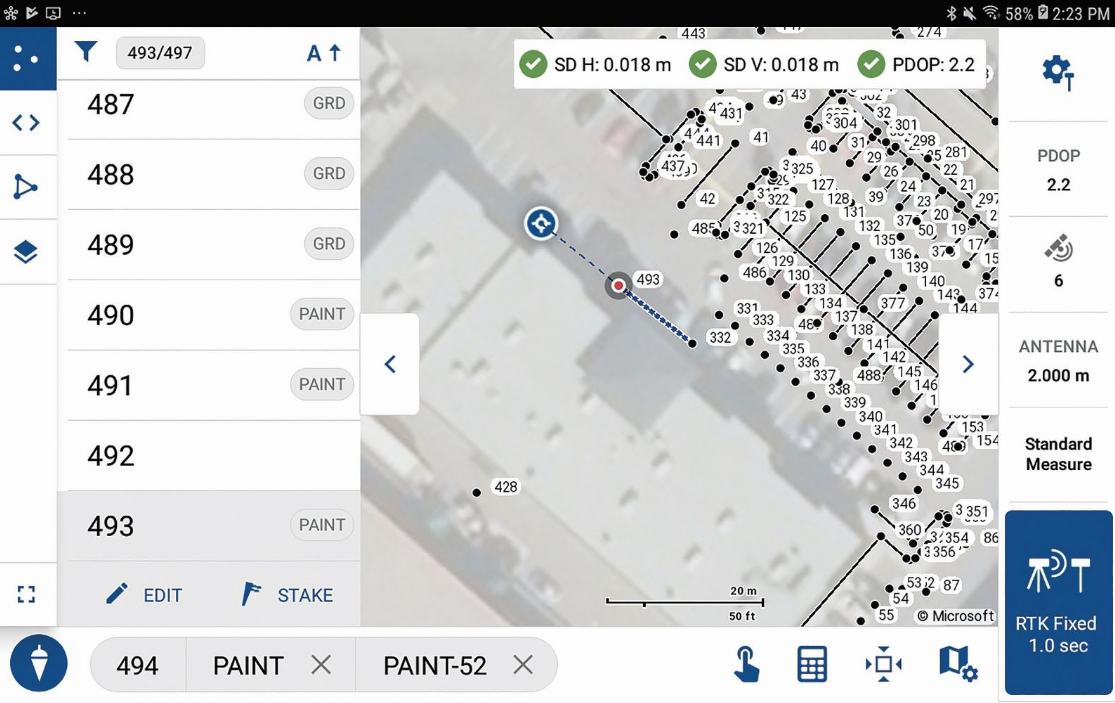 Founder Darcy Detlor was in his third year of studies at the University of Alberta in Edmonton where he ran a small business building small computer systems to help pay for college. He met up with two coders who had been developing DOS-based cogo software. They started selling complete PC, plotter, and software packages to surveyors in Alberta. 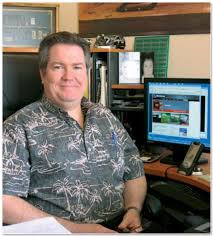 Detlor bought out his partners and formed MicroSurvey Software, Inc. in 1991. The popular office suite and FieldGenius were developed in-house, as well as packages for forensics and other applications. In 2010 MicroSurvey acquired the highly acclaimed least squares adjustment STAR*NET. MicroSurvey has since modernized the user interfaces but kept the core functions intact.

On vacation in the 1990s, Detlor fell in love with Kelowna, BC, as have the MicroSurvey staff who have been more than happy to relocate there. Kelowna is a bit of a geographical anomaly; one of the warmest and driest places in Canada, it has been discovered by the wine industry (125+ wineries) and tourism. It’s an appealing place to live and work and now hosts over 600 high-tech businesses.

Detlor earned a reputation of being one of the truly nice guys in geo, and he is enjoying his retirement knowing his legacy is in good hands.