Now that I am in my 60s, I have become more aware of potential age discrimination, and the reverse thereof. A few years ago, it bothered me when my purchase total was reduced at the last minute and realized I had received the “Senior Discount” without actually qualifying for it. Now it bothers me when I don’t get it automatically. Based on a recently published Federal Register Notice (FRN), it appears the National Geodetic Survey (NGS) is blatantly asserting age discrimination, but with good reason.

As the NGS continues to prepare for the eventual rollout of the modernized National Spatial Reference System (NSRS), it is contemplating implementing a yet-to-be-determined cutoff date for observations that will be reprocessed in the new NSRS. It seems that the primary concern is the vertical accuracy, or inaccuracy, that could be induced by using older observations to compute vertical positions in the new gravimetric datum. Being in a state that has, and does, experience extreme, often rapid vertical changes, primarily due to land subsidence, I strongly support this concept. 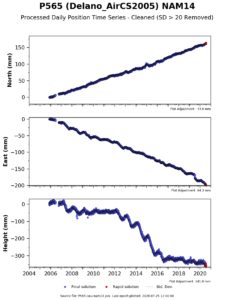 Unlike horizontal displacements, whether linear due to plate tectonics, or somewhat sudden due to co- and post-seismic movement (earthquakes), vertical displacements are not easily modeled and often quite localized.

The FRN mentions a possible age cutoff date of January 1, 2010, but also states it will not likely be fewer than 10 years. This means that geodetic positions of points where the most recent observations are beyond the chosen cutoff date will not be perpetuated into the new NSRS via reprocessing by the NGS. Why would this matter? We have CORS, correct?

Well, many surveyors still rely heavily on classic passive marks in the ground to control their surveys. This is certainly the case with local benchmarks for vertical positioning. If your preferred local survey control points with NAD83(2011)2010.00 and/or NAVD88 positions on them were computed from observations beyond the chosen cutoff date, they will be left behind in those systems. But there is still time to change that.

Not so long ago, the only way to accomplish submitting data to NGS and having it accepted for inclusion in the NSRS (published) was via the infamous “Bluebook” process. Then, along came OPUS Share, which technically doesn’t get observations/positions into the NSRS, but it does get NGS the data for various uses.

This tool has been an extremely successful mechanism for submitting observation to NGS in support of the GPS on Bench Marks campaign. Many tens of thousands of observations have been submitted via OPUS Share just in the last few years. Over 1,000 were submitted in July 2020 alone. These will all be candidates for inclusion in the new NSRS, as will any observations made between now and December 31, 2021. The problem with OPUS Share is that it requires a four-hour minimum observation, so unless you plan for it, previous observations, say a base unit on a geodetic mark for three hours, will not be accepted. That, too, is in the process of being removed as filter.

Directly from the FRN:

In order to increase the submission of GNSS observations on marks, NGS is prioritizing the finalization of an expanded OPUS-Projects tool, which will allow real-time kinematic and real time network (RTK/RTN) observations to be submitted, rather than the standard four-hour observations required in OPUS-Share. Initial roll-out of this new tool is expected to occur during calendar year 2020.

This means that users who have been trained as OPUS Project Managers will be able to include RTK/RTN vectors with their static observation data to process and submit their projects to NGS through OPUS Projects. They don’t have to be observations done once this enhanced feature is available. You could take observation data from a project done in say 2013 and run it through OPUS Projects and submit to NGS to ensure all the points in your project, including those positioned using RTK/RTN techniques, will be perpetuated into the new NSRS by NGS.

That being said, there are areas in California’s Central Valley where that likely will still not be a good idea. Perpetuating a vertical position determined by observations done in 2013 into the new gravimetric datum (NAPGD2022) could still have a large amount of uncertainty, depending on location. The age cutoff in some areas could realistically be reduced to only a couple of years for this reason. But, as is always is the case, surveyors must know the areas they practice in, including the geophysical characteristics, and select or reject survey control accordingly.

Whether through OPUS Share or OPUS Projects, if you want passive survey control where you work and play to be perpetuated into the new NSRS, make the effort. For local agencies, perhaps collaborating with the private surveyors in your area to re-observe regional networks is a possibility? You still have time.

Oh, and I will have fries with that discounted meal, please. 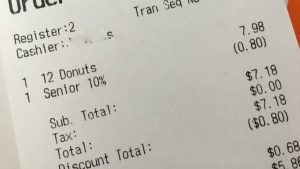