Above: Competition heats up. At the New England regional championships in Hartford are (from left) Jill Shilp, driver; Christine Miska, founder and Andromeda One coach; and Will Doyle, driver.

Efforts to channel today’s youth toward a career in something other than sports, finance, or entertainment face daunting challenges. Those are, after all, fields where it’s believed that massive salaries can be easily earned in a short period of time.

But there is currently a movement afoot that’s making huge inroads toward the promotion of scientific disciplines as a real consideration. Growing steadily each year, it involves students, homemade robots, an unbounded imagination, and a level of enthusiasm usually found only at sporting events.

It is all driven by membership in an organization called FIRST (For Inspiration and Recognition of Science and Technology) and culminates in a series of annual robotics competitions held at massive sporting venues, attracting tens of thousands of spectators. Seeing the ingenuity, craftsmanship, and technical prowess on display at a FIRST competition is knowing that the future for the scientific realm is going to be just fine. 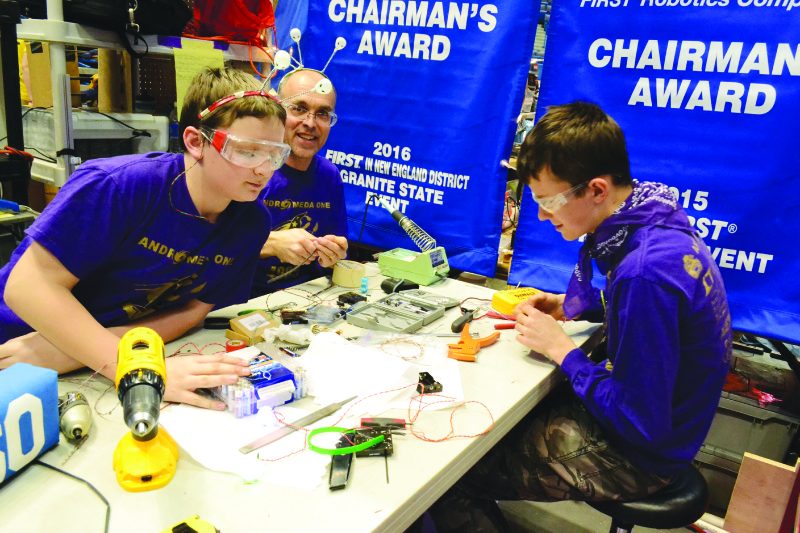 FIRST was founded more than 25 years ago by Dean Kamen, inventor of, among other things, the world’s first drug infusion pump and the Segway personal transporter. FIRST seeks to inspire an appreciation of science, technology, engineering, and math (STEM) in young people by challenging teams of students to design, build, program, and operate a robot that can be then entered into local and regional competitions.

However, FIRST is about a whole lot more than just robots, according to Steve Plamondon, vice president of sales for Massachusetts-based Topcon Solutions Store by day, Andromeda One mentor in his off-time.

Andromeda One, also known as FIRST Team 4905, is a robotics team from Ayer Shirley Regional High School in Ayer, Massachusetts. The team was launched in fall 2013 by team leader Christine Miska, program manager/engineering director for BAE. The team is currently made up of 23 students and 20 mentors.

“The real goal of FIRST is to instill an appreciation for science and technology, but it goes a lot further than that,” said Plamondon.

Along the way, the students learn the value of teamwork, they learn to take direction from the team’s many mentors, they develop pride and camaraderie, they make new friendships or strengthen existing ones. To see these kids work together to tackle a problem is just an amazing, fulfilling experience.

The groundwork laid by the FIRST team seems to be paying off. The team set a goal to inspire their school to add one new STEM class per year for three years. To date, the school has added six STEM courses: CAD I, CAD II, Computer Programming, AP Physics, AP Biology, and Genetics. In addition, the school has created a “STEM Pathway,” making graduation in two years possible.

The challenges of running a FIRST team are daunting and, not surprisingly, costly, according Miska. “Our annual budget to cover all expenses, including attending regional and world championships, is about $33,000,” she said.

So we are extremely grateful for sponsors like Topcon, Boston Scientific, Linear Technology, etc.

It’s important to note that NASA fully sponsors all new teams for their first two years, at which point teams have to assume the financial burden themselves. That’s the degree of importance NASA sees in this organization and its goals.

To help address the overall logistics of running a team, Andromeda One is divided into groups, each with its own responsibilities and area of expertise. “We have one group that handles finances, and they have a CPA mentor who guides them and teaches them how to handle all the financing matters for the team,” said Plamondon.

We have another group in charge of fund-raising so that we can get the sponsorships and funds needed to operate and attend these events. We have two groups in charge of software: one that handles the actual programming, the other responsible for learning CAD so that we can mock up the robot prior to actually building it.

Other groups include one in charge of team spirit, working hard to promote Andromeda One, both internally and to the outside world; an electrical group to handle the intricate wiring for the robot; and a mechanical group responsible for the actual build and maintenance.

One last group, but certainly not the least in importance, is the strategy group, which, in addition to scouting the performance of other teams at events, looks at the upcoming game and determines how to best play it from an offensive and defensive perspective.

“We have students in the stands with forms and laptops with Excel spreadsheets compiling stats on every team,” she said.

They are just like baseball scouts. We have stats on how many times a team tried to go over a defense to get to the objective, how many times they failed, which defenses were toughest, and so on. That information is as invaluable as the robot itself.

Plamondon added that the diversity of tasks–and the people who offer to tackle them–is important.

We are not just a team of engineers; we have finance people, electricians, communications people, programmers, and so on, each honing their particular skill. It is essentially like these students are running their own small company. How invaluable an experience is that?

Building for the Future

Topcon’s support of the Andromeda One team is the result of Steve Plamondon approaching Mark Contino, the company’s vice president of marketing, and Contino immediately seeing what a positive move it could be for all involved.

“Obviously, we knew the kids could benefit financially by having us as a sponsor; Steve explained the costs involved in supporting a FIRST team,” said Contino.

However, in the last five years or so, we have been making a concerted effort to reach out to students through programs like these. We need to help kids get excited about math and science and later on, hopefully, the civil engineering and construction side of those disciplines. There’s no denying that both the construction/survey industries and we, as a company, are going to depend on their involvement.

He added that, from Topcon’s perspective, that dependence stems from an ongoing need to have skilled, qualified personnel to sell its products, to train others in the operation of those products, to have people to maintain them, and so on. 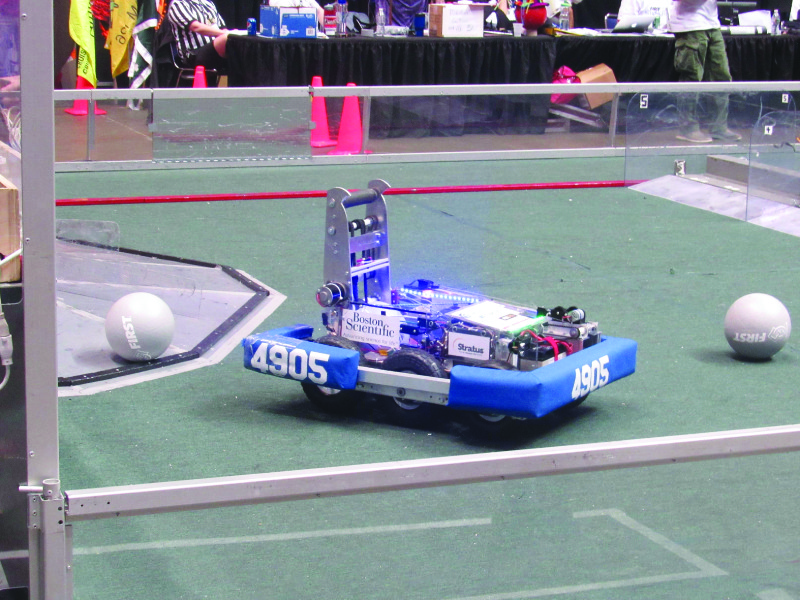 “As a manufacturer, it’s one thing for us to come up with the latest component or system to save time, increase efficiency, and so on,” he said.

But will the customer be able to use it or be able to hire the right people to use it? That’s why we’ve opted to dedicate a lot more time, effort, and resources to such educational opportunities; these are the kids that we are counting on meet those needs in years to come. So when Steve contacted me, it just seemed timely and the right thing to do.

“Have Fun Storming the Castle”

To witness a FIRST robotics competition is to step into a mixture of high school sporting event (complete with cheers and mascots), NASCAR race, and scaled-down demolition derby–with a smattering of Dungeons & Dragons-like costuming thrown in for effect. 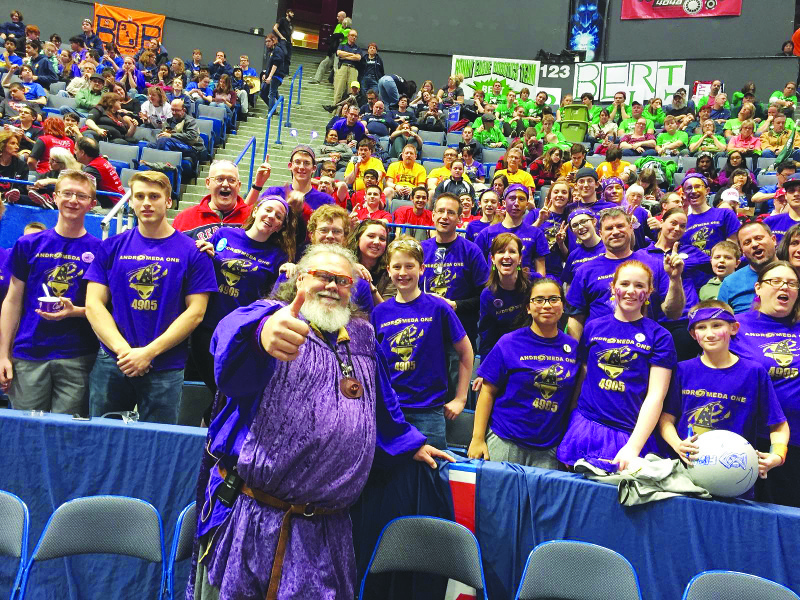 FIRST is undeniably a group effort. Shown here is the Andromeda One team in Hartford, fronted by a wizard-robed competition MC.

In the event, two alliances of three teams each compete on an elaborate course. This year’s design featured a medieval theme in which the teams had to breach their opponents’ fortifications, weaken their tower with memory-foam “boulders,” and capture that tower. Robots equipped with climbing devices or systems–not a mandatory item–can scale the tower to score additional points for their team.

“This event is every bit as exciting to these kids as a football game is to the jocks at their schools,” said Miska.

We are really proud of them and of what we’ve done in three years. That also includes our efforts to get girls involved in the team. I’ve found that you might have to ask the girls two or three times more than you have to ask the boys, but once they are on the team, they are there to stay.

Equally important to the overall effort is the commitment of Andromeda One’s mentors, the list of which is fairly impressive. They include Miska who holds a Ph.D. in computer science; another MIT computer science graduate; several programmers and electrical engineers; the aforementioned CPA;, MiskaÕs father, an electrician who was chosen the 2013 Mentor of the Year; and more.

Though still relatively new as a FIRST team, Andromeda One’s efforts this year were well-rewarded: they placed 19th out of 200 teams in their regional competition in Hartford, Connecticut, and 34th at the 2016 FIRST World Championships in St. Louis–a competition that included more than 900 teams from 42 countries.

More importantly, these boys and girls are proving what Dean Kamen said in St. Louis this year:

We believe that if you can show kids that the tools of mathematics and engineering empower them to do some really cool, really fun things, theyÕll get passionate about it.

Bring on the future.