Igor Kidinsky, aka Eager (The Kid), estimated that both monuments—for the same property corner—were to be found nearby. Glenny Dale, aka Glutton (The Old Man), turned on the metal detector, but both surveyors soon spotted the old, grayed stakes in the shadows and knew they had found their pins.

The task was to determine which of these two pins represents the property corner and which represents a monument that correctly marks someone’s really good theoretical point.

This point along a known section line brought them into a scattered pine forest, where the long stripes of sunlight exposed a soft forest floor, laid with thick pine needle carpet. At the end of one long stripe of sunlight crouched a porcupine, about 30 feet away. Surveyors and porcupine stood silent, watching each other with cautious alarm, ready to flee. 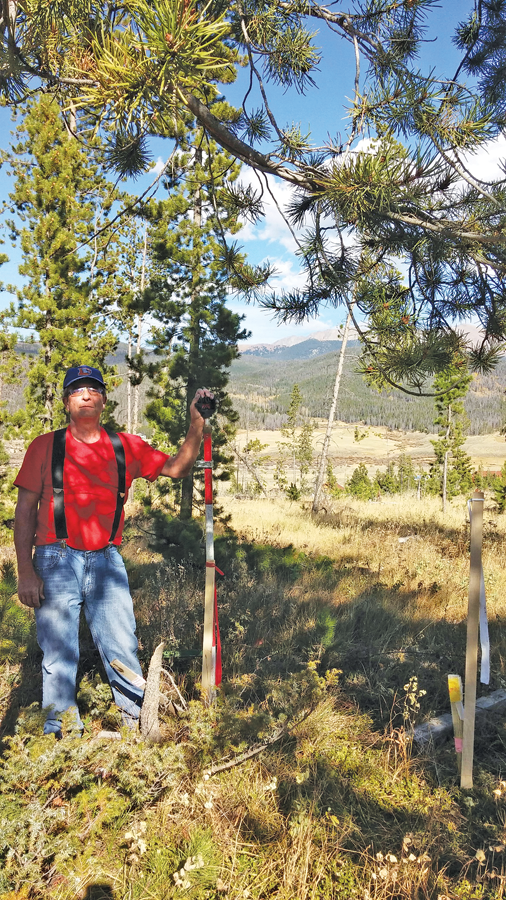 The author stands on the new aluminum cap, three feet from a plastic cap set 30 years prior, with the Continental Divide in the background. Credit: Pam Ward.

Eager, The Kid, had stayed up late, studying two survey plats and the applicable BLM guidelines that would be cited in their determination of the desired aliquot corner. One plastic-capped rebar was set in 1980 and reasonably matched the dimensions of the east line of a recorded subdivision plat. The second pin was a 2” aluminum cap on 3/4” rebar, set in 2010, precisely representing the west line of an aliquot portion of a large ranch, lying about 3’ north of the 1980 pin, theoretically giving their client more land than the old plastic cap.

The accompanying plat showed the aluminum cap and that the “found plastic cap” lies “3.21 feet south, 0.58’ west of the ‘corner.’” The Old Man was hired to run the aliquot line, starting wherever the correct location of this 1/64 corner was, then running east.

The guy who set the aluminum-capped pincushion was well respected for his careful, precise measurements. He often cited quotes from Chapter III of the BLM Manual. He never guessed at whether to “accept” a monument. Like other surveyors, he followed Chapter III and faithfully adhered to the guidelines, which required “straight lines” and “midway” points between section and ¼ section corners.

Like other pincushions in this region, the aluminum caps were bigger, taller, and far more precise with GPS than the likes of a 1980 survey using total station traverse. The Kid had “hit the cap” with his own calculated point and now realized that the 1980 pin was likely set 3’ in error.

Eager, The Kid spoke up, testing his theory from the previous night’s study: “This aluminum cap is in the proper, straight line, on-line location for the aliquot corner, according to the guidelines in Chapter III, in comparison with our measurements of this section line.”

The Kid reasoned on: “Since this 1980 cap may or may not be the true corner for the line going west, our corner is the aluminum cap, because it is very precise for our line going east.” Eager hoped Glutton would be impressed with his memorization of a book of guidelines.

Glutton, The Old Man, had memorized the 1947 Manual long ago and brought down chapters from his sharp mind’s vault of history, while The Kid brought up the 2009 Manual on his phone.

The Old Man said, “The BLM Manual is a book of instructions, not guidelines, because it says ‘INSTRUCTIONS’ on the cover title of the book in bold type. The word ‘theoretical’ appears in several places, like pages 91 and 92. Every reference to the term ‘straight line’ in Chapter III is qualified by the verb ‘run’ straight lines!

“There were no calculators when the Manual was written. This means that the first surveyor is instructed to run—the survey process using a transit, compass, or whatever tool exists at the time—a straight line and set aliquot corners, as near as may be, as distinctly opposed to the theoretical calculation of lines, meaning not run, not set.

“And, we retracement surveyors are to follow the instructions in Chapter VI,” surmised the senior surveyor. “The 1980 survey complies correctly with Chapter III. This 1980 pin is legally established as contemplated by the Founding Fathers.

“The BLM Manual acknowledges, recognizes, and describes the distinct difference between a corner set by lines run on the ground and a theoretical point. Property corners do not lie in the head of some future surveyor’s theoretical brain,” gloated the Glutton.

“Those who set their pins on theoretical lines are setting certified  theoretical property corners,” he said with great sarcasm.

“The new U.S. had war debts to pay for, and the PLSS was devised as a means to get monuments in the ground so that lands going west could be purchased and settled by the citizens. Thomas Jefferson and George Washington, both county surveyors, understood the futility of precise layout and that settlers don’t settle on a piece of paper. They settle on the ground and plant their crops according to visible monuments set in an orderly manner. The appointment of Edward Tiffin, a former U.S. senator as the first commissioner of the GLO in 1812, by James Monroe, occurred during our second war with Great Britain. The Homestead Act of 1862, signed by Abraham Lincoln, occurred during yet another war.”

The Old Man had the full attention of The Kid and took a few deep breaths.

“Our society has seen surveyors at work after each of our homeland wars as they bring great organization and order with them. Society trusts our profession to maintain that order. We do not have bloody shooting wars between every landowner because our system of monuments works and maintains the peace we take for granted!

“Putting my stamp on this aluminum-capped pincushion would be like grabbing that porcupine,” Glutton chuckled.

At that moment the attentive porcupine fled, lumbering away to safety—quills straight up like a nightmare pin garden—as if to advise all to stay away from pincushions.