A large risk-assessment and data-analytics company created its own internal system to collect imagery, write software, and develop processing workflows.

One such company is Verisk, a risk-assessment and data-analytics services company headquartered in Jersey City, New Jersey, with more than 6,000 full-time employees and a 2014 revenue of $1.75 billion. It offers predictive analytics and decision-support solutions for rating, underwriting, claims, weather-risk and global-risk analytics, natural-resources intelligence, and economic forecasting to customers in insurance, energy, financial services, health care, and other industries. Because of its size, it can write its own software and collect its own aerial imagery.

One of its fully owned businesses, Geomni, has built, maintains, and is constantly expanding an address- and location-based database of property-related analytics. Using remote sensing and machine learning technologies, Geomni gathers, stores, processes, and delivers geographic and spatially-referenced information relating to residential and commercial structures. It is used by property professionals to help determine the scope of damage after a major weather event and to discover hazards, assess risk, and perform valuations. 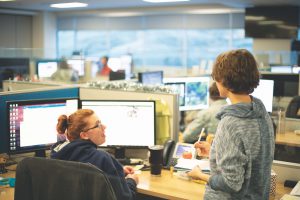 Verisk started Geomni in 2012 because some of its divisions and entities, such as the group in charge of its Xactware software, needed to have a more complete understanding of the exterior characteristics of properties, which is best achieved through high-resolution aerial imagery.

Magnus Olson, Geomni’s senior vice president for data strategy, says that most of the existing sources of such imagery “are not comprehensive or do not have the detail or the time stamps” that Verisk requires to fully understand its residential and commercial properties. Olson has been active in the geospatial data industry for almost 20 years and oversees the company’s production and acquisition of data, both on the processing side and on the specification side.

In spring 2013, Geomni launched a series of data package products and has continued to build on that. About two years ago, it decided to build its own aerial acquisition fleet and began acquiring a range of different companies that today make up its network of hubs—currently 13 across the United States. “We have them spread out across the country in such a way that we can reach any point on the U.S. mainland within a two-hour flight from one of our hubs,” Olson points out.

The company’s pool of aerial imaging resources includes sensors and about 120 aircraft. “We are building up toward a capacity to acquire approximately 193,000 square miles of high-resolution aerial oblique imagery every year.”

“The spec with which we have been capturing imagery since 2012 was developed by my team,” Olson says, “and we are also the people who process the imagery that we are capturing so that it can be published and used to produce our data packages, which is the main product that we sell to the insurance market.”

Geomni populates these data packages with the data it extracts from the high-resolution aerial oblique imagery that it collects. Until it acquired its own fleet, these data packages were its core source of revenue. Since then, it has begun to branch out into other, more traditional geospatial markets beyond aerial imagery.

Geomni’s aerial acquisition program is focused on urban areas as defined and identified by the U.S. Census Bureau: any area where there is a building within a quarter mile of another one.

“With that understanding, our aim is to capture and process high-resolution aerial oblique imagery and other types of geospatial data of as many properties as possible across the entire United States.”

Once it has acquired and processed those data, which it considers its baseline coverage, Geomni runs them through its analytical tools and processes to create the products that it markets.

The data packages, Olson explains, “are essentially machine-interpretable data files that contain all kinds of information about a property, including its external measurements—the size, slope, and pitch of the roofs, the roof vents, the rain gutters, as well as items located on or around the property, such as swimming pools, concrete patios, windows and doors, roof material, wall material, whether there are trees on the property, and how big they are.”

“There is a cross-referencing of this data with other databases across the various groups in Verisk that contain information for certain customers—things like different kinds of insurance-risk characteristics or property boundaries, lot size, address databases, and things like that,” Olson points out.

“All this is stored in a centralized data repository, and then, whenever the market demands a new type of product, we can reach into that database, combine these pieces of information, and create new product deliverables.” 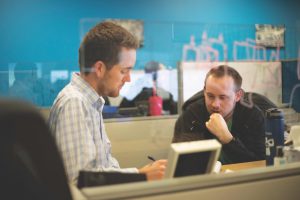 In the past, Olson recalls, a typical high-resolution capture of a city area of, say, 600 square miles, would take three to four months to process. Geomni decided that was way too long for the volume and resolution of the imagery that it intended to acquire and process.

“So, we have developed our own, in-house processing workflows,” he says, “to run in the cloud and to enable us to turn this data around in days rather than months. It is a very complex process.”

Unlike other companies in the aerial imagery business, Geomni always performs aerial triangulation as part of its standard workflow to get the accuracy it needs. “This is done primarily to support our computer vision initiative, which we’ve been working on over the past six years.” 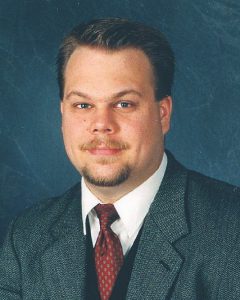 “We spend a lot of effort and money on developing and improving workflows and are not relying on standardized, commercial off-the-shelf software solutions,” says Olson. “We do this so that we can get the performance that we need to support this acquisition effort.”

When a hurricane is about to make landfall in an area, Geomni prepositions assets on the ground, then captures imagery shortly after the catastrophe, as it did in the cases of Hurricane Florence and Hurricane Michael.

“Before the hurricane hit, we had been flying most of the impacted areas as part of our baseline coverage,” Olson recalls. “If a customer orders a data package in an area where we have flown post-catastrophe imagery, they would get both that and any existing baseline imagery as part of the report, which allows them to see any damage that has happened.” 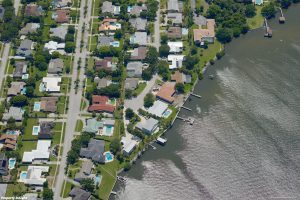 Geomni stores the data that it detects and catalogs about each property in its main database. The format of the product it sells depends on its content.

For example, Geomni roof data packages are XML data files that contain the georeferenced imagery and its metadata, a 3D model, and such additional attributes as the number of vents, the linear feet of gutter, the roof material, and the roof’s bridges, valleys, and peaks. The users’ software will parse these files and display them according to their needs.

Currently, most of Geomni’s customers use Xactimate, a software product that Verisk developed. Insurance companies, roofing companies, and other contractors use it to provide cost estimates.

“One of the deliverables that we do for just record keeping, essentially, is a PDF document that is derived automatically from the data package,” says Olson. “We are also able to export the same data package in industry-standard formats, such as OBJ or DXF, so that you can import and manipulate the 3D model in a regular commercial software.”

The resolution of Geomni’s imagery depends on the level of information that it’s trying to extract. For instance, reliably classifying and tagging roof vents—pipe jacks, turtle vents, ridge vents, etc.—requires a resolution better than 3 inches, and preferably 2 inches, says Olson.

Many end users of aerial imagery prefer “leaf-off” images, which provide a much better view of buildings and other structures than “leaf-on” images. However, from an insurance risk perspective, “there is also value in understanding what kind of trees you have, how tall they are, what the width of that canopy is, whether it overlaps or intrudes upon the roof of a building, and whether branches and trees close to roofs could damage a property in case you get strong winds,” Olson explains.

“So, there is value to leaf-off but there is also value to having leaf-on.” Besides, he points out, the scope of Geomni’s acquisition program requires that it acquire data year-round as long as there is good weather and a good sun angle. “Acquisition is a continuous effort for us.” 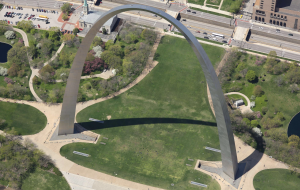 Geomni does not buy imagery from other companies. However, it does in some cases access third-party imagery to complement or validate its own imagery.

“For example,” says Olson, “if we have imagery of a property that is three years old and we are asked to prepare a Geomni property data package for it, some of our customers would like to know that that property has not had any major changes to it in the time that has passed since we last captured it.”

For that purpose, the company can use more recent satellite imagery to verify that the building has not been torn down, significantly expanded, re-built, or changed in any other way that would affect the accuracy of its data package.

While interested home owners can order stand-alone data packages from geomni.net, the bulk of the company’s sales are business-to-business. One major segment, of course, is insurance companies. Other purchasers include financial companies, mortgage underwriters, and specialist contractors, such as landscaping companies.

“We are targeting anyone who really needs accurate and detailed data and time-stamped information about a property,” says Olson.

Geomni, he adds, is also expanding in a more traditional geospatial market: photogrammetry, surveying, and mapping companies and the mapping departments of large companies. “With that market, we are more focused on supplying aerial imagery, lidar data, and derived products.”

A common use case for a Geomni roof data package is for an insurance company to estimate the cost of repairing damage to a roof from an event such as a large-scale hail storm, a hurricane, or a tree fall. The turn-around time from the moment the insurance company orders the data package to the moment Geomni delivers it must be as short as possible.

“That is part of the reason why we have to develop our own tools and workflows,” Olson says.

On average, he claims, it takes less than two hours, with a substantial number taking less than 30 minutes. Typically, the insurance company then ingests the data package into Xactimate and uses the geometrical properties it contains to determine, for instance, how much it would cost to replace an entire roof face.

Another use case for a Geomni roof data package could be a roofing company wanting to prepare a bid to help a homeowner repair or replace a roof. They need to be able to estimate with a high degree of accuracy how much material they will need, how complex the job will be, and whether there are complicating factors.

“Rather than sending someone over to climb that roof and try to measure it on site,” says Olson, “they can simply order a data package from us and have that information readily available.”