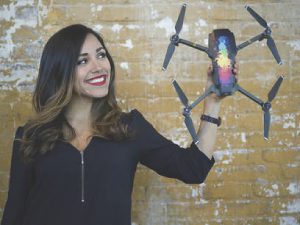 By the summer of 2018, the Federal Aviation Administration of the U.S. had already reached the 100,000 mark for part 107 small UAS operator registrations. The number of units for non-military UAS is expected to triple to over three million units by 2022—or more. Elana Buenrosto is a certified drone operator who entered the field from a non-geomatics background but became interested in promoting the work of women pilots, by many estimates proportionally under-represented in the industry. Buenrostro, a video producer and social email consultant who earned a bachelor’s in media, film, and theater at the University of California, San Diego, has had a successful career in fields directly related to her majors, but it was a trip to the Great Wall that sparked an interest in UAS and their potential.

Women Who Drone is a community (open to all genders), a consultancy, an educational resource, and a media company with an open and engaging structure that has garnered members from a diverse range of UAS end-user constituencies, expertise, and representatives in the industry. Women Who Drone is growing, seeking new members and affiliates, and is also crowdfunding.

So many of the commercial uses for UAS are geospatial by nature, and while the vast majority of drones are being used by hobbyists and entertainment, there is strong growth in agriculture, engineering, utilities surveying and mapping, and more. Thus, the number of women pilots is sure to grow accordingly—Women Who Drone looks to provide a boost in all fields.