An airport-mapping project indicates that a new set of applications may soon be served with airborne imagery collected under low-light and nighttime conditions. 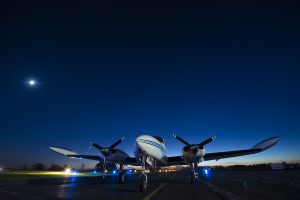 An after-sunset view of Columbus, Ohio with all the artificial lighting typical of populated areas.

A geospatial services firm that specializes in building geographic information systems for airports (aka Airports GIS) faced a mapping challenge it had encountered before that’s common to airfields. Geopro Consultants, LLC, based in Dayton, Ohio, had been tasked with identifying and mapping the precise locations of more than 10,000 lights and signs that provide illumination and directional information for pilots on the runways, taxiways, and aprons of a major U.S. international airport.

Chad Snoke, Geopro’s director of aviation geospatial services, explained the challenge: Some lighting fixtures on airports can be mapped with high-resolution aerial imagery, but a very large number of them can’t be identified because the fixtures are embedded in the pavement and blend in with the cement.

“[Embedded lights] are very difficult to map with traditional daylight aerial photography, and ground surveying the features would require closing the runways for hours, which is not an option,” said Snoke.

Airport staff had suggested collecting extremely high-resolution images with low-flying drones, but that idea was quickly quashed because operating unmanned aerial vehicles at a busy airfield is a non-starter due to the risk of collisions with aircraft.

But the lighting fixtures have to be mapped somehow. They are considered critical GIS features for airfields because of their importance to safe operations. Lights must be maintained and repaired on regular schedules. Airports around the world are undergoing expansions and upgrades at such a rapid pace that lights are constantly being installed or moved, making it an ongoing challenge to keep an updated inventory of them.

He concluded the best way to map airport light fixtures was to image the airfield at night with all the lights illuminated.

The Value of Low-light Imaging

In our early experimentation, low-light imaging meant flying when the sun angle was below 30 degrees to the horizon, usually at dusk. But we also tested flight operations under thick cloud cover.

We had two objectives in mind with these R&D efforts. The first was to extend the daily flight window for image acquisitions, making our activities more financially feasible, especially in those times of year when the hours of high-sun-angle illumination are short. Operators of aerial mapping companies are well aware that in some latitudes—during late fall through early spring—the window is so small it’s not economically possible to deploy an imaging aircraft.

Our second goal was to enhance the utility of airborne imaging in the immediate aftermath of manmade and natural disasters. Hurricanes, floods, and train derailments rarely confine themselves to the daylight hours. We realized there was tremendous value in collecting image data over an emergency scene and getting it into the hands of responders in the first hours after tragedy struck rather than waiting for sunrise the next day.

At Midwest Aerial, we have invested in several DMC II large-format cameras. They are well suited for low-light imaging because of a technology called timed delayed integration, which is a form of forward motion compensation. This technology shifts pixel value information from one row of pixels to another, which allows the camera shutter to stay open longer at high aircraft speeds and low altitudes without blurring the image.

In addition, the DMC II has a relatively large 14-bit radiometric resolution, designed for crisp feature imaging in light conditions ranging from the shadows of deep canyons to the bright white surfaces of snow-capped mountains.

We experimented with a variety of settings on the DMC II camera and eventually devised an inflight data collection and ground-based processing workflow that proved valuable imagery could indeed be captured in extremely low light and even dark conditions. Just as importantly, however, the results demonstrated that nighttime imagery often reveals features and attributes not readily seen in traditional daylight collects.

This was on Chad Snoke’s mind when he contacted us about his airfield lighting project. 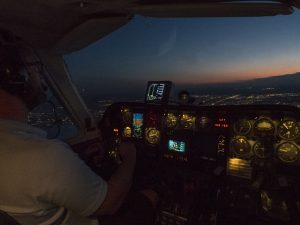 Inside the Cessna 310 aircraft that was used to capture the nighttime imagery. 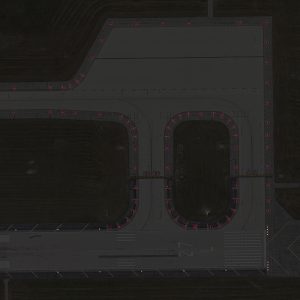 The positions of lights are auto-extracted based on the color-intensity in the dark imagery. 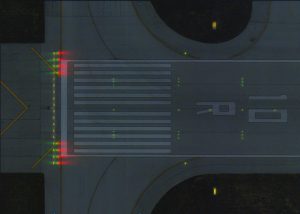 The dual-color and embedded runway lights are clearly visible in this composite orthometric photograph.

Mapping the Lights after Dark

Geopro contracted Midwest Aerial to fly the airport with the DMC II once during the day and once after dark. The daylight collect was used for standard photogrammetric extraction of planimetric features to build the GIS.

With numerous similar projects under its belt, Geopro requested a pixel resolution of 5-centimeter GSD, sufficient for accurately mapping large hangars and terminal buildings as well as small objects like the paint striping on runways.

It is necessary for the Midwest Aerial flight crew to carefully coordinate with Air Traffic Control for day and night operations, which were conducted in Class B airspace at the same altitude of 2,700’ AGL.

The evening collects began as the sun elevation reached -3 degrees and were concluded at about -10 degrees. During this time, the DMC II was operated in manual mode in accordance with low-light strategies we have developed over the past several years.

The nighttime acquisitions were a success. Geopro photogrammetrists used the data to map the locations of over 10,000 airport lights and signs with a horizontal accuracy of 3 inches.

“After Midwest Aerial delivered the raw imagery and airborne GPS/IMU data to us, we performed aerotriangulation with tie point extraction and bundle adjustment on the two imagery sets—night and day—simultaneously, to ensure the two image sets are aligned,” said Snoke.

“We then used DAT/EM’s Summit Evolution software with Esri ArcGIS to digitize the points in a 3D photogrammetric environment directly into a geodatabase. Working inside a GIS environment gave us the benefit of being able to collect multiple attributes about each light during the mapping process.”

As Snoke had expected, even though the light fixtures themselves may not have been visible in the orthorectified nighttime imagery, the photogrammetrists could pinpoint their location by interpreting illumination and shadow patterns.

Types of lights could even be determined by the color of their illuminations. For example, some airfield lights are red on one side and green on the other to indicate the correct direction for aircraft to travel. Photogrammetrists could clearly see these colors in the nighttime imagery.

To make the interpretation easier, Geopro orthorectified both sets of imagery and developed a composite out of the day and night data. This merged orthophoto had the benefit of allowing photogrammetrists to see visual details from the day imagery and colors and light patterns in the night imagery. Beyond mapping light locations, gaps in illumination patterns enabled Geopro to identify burned-out and damaged fixtures on the airfield.

Noting that airport lighting is likely just the beginning of applications for low-light data, Snoke marveled at how this could be a game changer for aerial imagery: “Nighttime imagery is so different from what we’re used to. Being able to map at night like this requires you to think differently about what’s possible.” 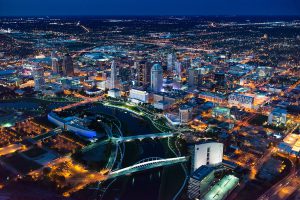 The yellow-orange of high-pressure sodium used for street and parking lot illumination is clearly visible here.

The Future of Low-Light Imaging

One conclusion we have observed repeatedly in our R&D projects is that just as sunlight can make things clearly visible in imagery, so can darkness. A case in point was a power outage map we created in the wake of a storm hitting near our Midwest Aerial headquarters in Ohio. DMC II imagery collected less than an hour later clearly delineated which neighborhoods had electricity and which didn’t: vital information for response teams.

We have begun working with college campuses and sensitive facilities to evaluate locations where illumination can be improved. The most likely places for crimes to be committed on campuses or for perimeters to be illegally penetrated at military bases or energy plants are typically the darkest. A nighttime image shows precisely where gaps in lighting exist and enables facility managers to model various illumination patterns.

Midwest Aerial has also approached urban and transportation planners to consider using imagery as a cost-effective means of determining where road and highway light poles should be positioned to provide maximum illumination with the fewest fixtures. Nighttime lighting, especially along highways in remote areas, is a proven method of enhancing driver safety.