Above: The YellowScan Vx-20 collected this image in Hiroshima, Japan in May 2018.

A surveying company developed a self-contained UAV lidar system so teams could gather data without a lidar specialist. 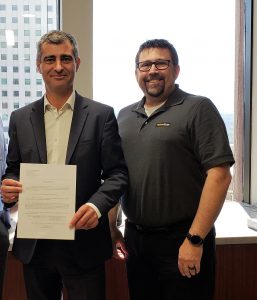 Some companies are born (and some are transformed) when their founders switch their focus from using a tool for projects to developing that tool and selling it.

An example is the GIS giant Esri, which, for its first dozen years of existence, used the then-nascent technology of computational geography to perform analyses while advancing the tools with each project. In 1981 Esri switched to building GIS as a product for other people to use.

Likewise, the surveyors and geomatics specialists at the French aerial mapping services company L’Avion Jaune (“The Yellow Airplane”) spent 13 years pioneering UAV surveying, then they realized that there was a market for UAV-based lidar solutions.

When the leaders at L’Avion Jaune needed a lightweight and compact UAV lidar, they started an internal R&D project and developed the Mapper I. Then in 2015, they spun that project out by founding YellowScan SAS. (In turn, the U.S. company YellowScan, Inc. is a fully-owned subsidiary of YellowScan SAS.)

The company “has been evolving rapidly and growing very fast,” says Thibaud Capra, an application engineer at YellowScan, Inc. “L’Avion Jaune started with three people, and today YellowScan has more than 30 staff.” 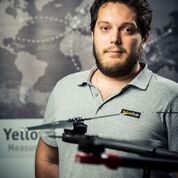 Thibaud Capra is an application engineer at YellowScan.

The vision of YellowScan’s founders was to produce a reliable and easy-to-use product for the field that was fully self-contained and would not require a lidar engineer in the field to collect the data. They also focused on ensuring that their product would deliver the promised data quality and have a streamlined back-office workflow.

The idea was to scale an expensive and complex lidar technology that had been in use for decades, cutting the workflow to make it available to engineers, surveyors, and geospatial technicians in the field for collecting data.

Two factors contributed the most to making it possible to put lidar sensors on UAVs, Capra explains. One was the self-driving car industry’s push for more powerful, more compact, and cheaper lidar sensors. As the best example, he cites Velodyne, which started with the now famous VLP-16 PUCK and is now producing the VLS-128, which has almost ten times the number of lasers and four times the range as the VLP-16.

The other factor was improvements in inertial measurement units, which are ever more compact, reliable, precise, and accurate.

“At YellowScan, we combined these two main elements with the onboard computer to coordinate everything,” Capra says. “We didn’t want to draw power from the drone, so we added in a battery and, there you go—you basically have our system, all self-contained and independent from the drone.” 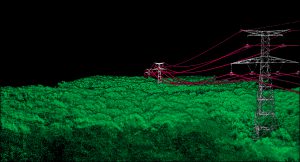 Lidar enables the capture of fine features, such as power lines, regardless of weather and light conditions. This image is from a dataset in France collected for RTE (a French low-voltage electricity provider), using the YellowScan Vx-20 in July 2018.

YellowScan uses lidar sensors from Velodyne and has “a very positive relationship” with it, says Cliff Holle, the general manager of YellowScan, Inc.

“We do cross-marketing with them, such that we can show them case studies from our user community using their products.”

While YellowScan represents a very small part of Velodyne’s market, which is mostly in the automotive sector, “those folks whom we work with within the company have a very high level of attention to our end users’ requirements.”

Velodyne products are plentiful in the market, points out Holle. What starts to distinguish his company, he says, is not any one individual component but the overall product as “a complete system of systems.”

Yellowscan’s selection of high-end IMU-GNSS technology from Applanix, he explains, enables them to trust the quality of the data collected with fewer oversight requirements in the field and adds flexibility to the solution.

Its adoption of Trimble’s worldwide, satellite-based RTX correction service decreases the amount of equipment that its users must take into the field because they do not need a base station.

Beyond that, Holle says, what distinguishes YellowScan is the integration.

“It is very difficult to truly integrate, align, measure, and produce a system that, once calibrated, will stay calibrated for as long as expected,” he points out. “When we deliver a system, it is not based on the specifications provided by, say, the laser scanner vendor. Rather, it is the system that has gone out in the field with our professional surveyors who collect data and verify the quality of the data, and then that process becomes our specs.”

Capra says, “We carry on [our] ease of use to the processing part, where you generate your point cloud.”

Users can use POSPac MMS or POSPac UAV, two software suites from Applanix, to post-process the trajectory, using either their own base station or the local CORS network base stations to create their own virtual reference station. Alternatively, they can use Trimble’s RTX feed to correct their trajectory and then integrate that corrected trajectory into their own work flow.

YellowScan’s software CloudStation automatically suggests which parts of a flight line to keep (typically, the straight lines) and which to drop, allowing users to generate a point cloud in five minutes, Capra says.

A system’s precision, Capra explains, impacts its accuracy. YellowScan’s Mapper 2, which is an integration of an Ibeo Lux scanner, is noisier than the Surveyor, which uses a Velodyne VLB-16. That is why the latter has an accuracy of 5 cm while the former has an accuracy of 10 cm, even though they have the same GNSS receiver.

YellowScan sells its devices to “at least two very obvious markets,” says Holle. One is the service community, which tries to be as agnostic to the markets as possible. “They will pursue any vertical application that will let them win work for their crews.”

The other is the community of asset owners. “Rather than selling to the service provider that services a utility, we may be selling directly to a utility, which then wants to train and staff its own team for this work in-house.”

From the perspectives of both the service community and the asset owners, the energy sector is a very important portion of the company’s market.

This includes “electric transmission and distribution, any type of asset mapping and inventory, as well as the management of the corridor itself, mapping for vegetation encroachment, any type of human build-up encroachment, wash-outs if you are doing a pipeline corridor-type of mapping,” says Holle. 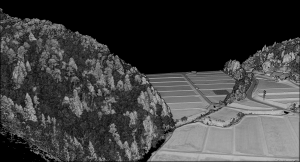 This aerial lidar scan was collected in Hiroshima, Japan, using the YellowScan Vx-20 in May 2018.

Another important market is mining, especially open pit mines. This ranges “from something as relatively simple as stockpile monitoring to being able to monitor and track the process of high-value volumes moving out of the quarry through the production facility and ultimately into the tailings facility to be able to help them quantify the total volume of product being moved.”

According to Holle, in the United States both the service providers and the asset owners are focused more on finding the best possible solution available that provides the answer they require at the specifications they require, while in many of the European markets the attitude is to make do within current budgets.

The result is that in the United States YellowScan’s high-end products are a higher percentage of its sales than they are in Europe. European companies are also more likely to “tweak” products than U.S. companies, Capra adds.

“The U.S. market really wants a turn-key solution that is easy to use and reliable, while in Europe they are more willing to tune in what they have, to try to optimize the results and get sometimes even better than expected results out of their system.”

YellowScan plans to continue to expand beyond Central Europe. One area for future expansion is flight beyond visual line of sight (BVLOS) for corridor mapping. In addition to a capable UAV and permissive regulations, Holle points out, BVLOS also requires the right sensors and logistics. For this reason, YellowScan is looking at technologies such as Trimble’s RTX that do not require a base station.

Like so many other geospatial technologies, lidar and photogrammetry are complementary.

“Photogrammetry is usually easier and more accessible to the end user,” says Capra, “mostly because the devices required are cheaper. It makes it easier to collect, takes longer to process, and yields much finer results if you are doing close-ups.”

He cites the example of archaeology and heritage preservation, for which photogrammetry is still better than lidar because of its precision.

Lidar, on the other hand, can penetrate vegetation. “We’ve seen multiple use cases of people discovering ancient ruins under vegetation using lidar.”

Additionally, he points out, because lidar is an active sensor, it can be used in pretty much any weather, while shadows, weather conditions, and even lighting limit photogrammetry.

“Overall, lidar is more flexible regarding the time and weather conditions of your survey and less sensitive to surface roughness or reflectivity than photogrammetry.”