All photos taken prior to introduction of COVID-19 distancing guidelines

Paris is grand—and getting much grander. One of the most visited—and loved—cities in the world, The City of Light began the Grand Paris initiative in 2007 with the goal of keeping Paris competitive with the world’s greatest cities into the 21st century.

The Grand Paris project aims to improve quality of life, social and economic sustainability, strategic development and environmental protections, all while preserving the great history and heritage of the city that attracts 30 million visitors a year. Part of the initiative added three neighboring districts—Hauts-de-Seine, Seine-Saint-Denis and Val-de-Marne—to the metropolis. The combined population grew from 2.2 million to more than 12 million inhabitants, rivaling London and other major European cities.

To support the expanded metropolis, a huge and aggressive transportation plan, the Grand Paris Express, is producing the largest subway and urban rail expansion in the western hemisphere. Already known for its exceptional public transportation system, Paris will gain increased transportation coverage and capacity while reducing auto traffic and its accompanying congestion and pollution. In addition to streamlining access to the three Paris airports, the transit system will tie suburbs into the region’s business and arts districts, recreation and sports facilities as well as schools and universities.

With a projected cost of more than $35 billion, Grand Paris Express seeks to enlarge the rail capacity of both the century-old Paris Métro and the regional express networks by adding 200 kilometers (124 miles) of new lines along with upgrades to existing lines. The rail expansion will deliver a long-desired ring route, creating 68 new stations encircling Paris. Transit times to the Paris airports will be reduced, much of the rolling stock will be entirely new, and the time between trains at most stations will be considerably reduced. The lofty goal is to serve two million additional riders per day by 2030, an increase of roughly 40 percent.

Despite ongoing concerns, funding issues and early construction delays, the project is essentially on track. Much of the credit for this success stems from the use of new technologies and automation by the AEC (architecture, engineering and construction) industry.

The high-visibility, high-pressure project is not a place for beginners. Grand Paris Express has involved many of the world’s most prominent and innovative design and construction firms. With 90 percent of the new rail lines to be underground, two major engineering and construction companies,

Both firms have extensive experience in the types of construction undertaken at the new ring route (Line 15) and the expansion of Line 14 through downtown Paris. Eiffage GC is one of the top three construction firms in France, top 10 in Europe, and top 30 worldwide. The firm’s expertise is in heavy civil, vertical, and energy construction as well as infrastructure operation. Razel-Bec, the civil division of the Fayat Group, is also a global concern and one of France’s largest independent construction groups.

Tunneling is particularly susceptible to schedule and budget-busting hazards—a problem in one area can shut down work over an entire line. Eiffage GC and Razel-Bec turned to their hardware and software providers to seek out new solutions to reduce risk and speed construction. The decision to involve their technology suppliers is paying dividends. Two of Eiffage GC and Razel-Bec’s Grand Paris joint ventures implemented several advanced surveying applications for tunneling, including automated real-time monitoring.

On the southeastern portion of the new ring-route near Champigny Centre, the new L15B tunnel is being built using a mixture of tunneling techniques. There are many houses, businesses and utilities nearby that could be affected by the massive excavation, including subsidence or tilting resulting from the tunneling activities. Eiffage GC and Razel-Bec established a comprehensive monitoring system to check for any motion related to the trenches during construction and for a period after completion. 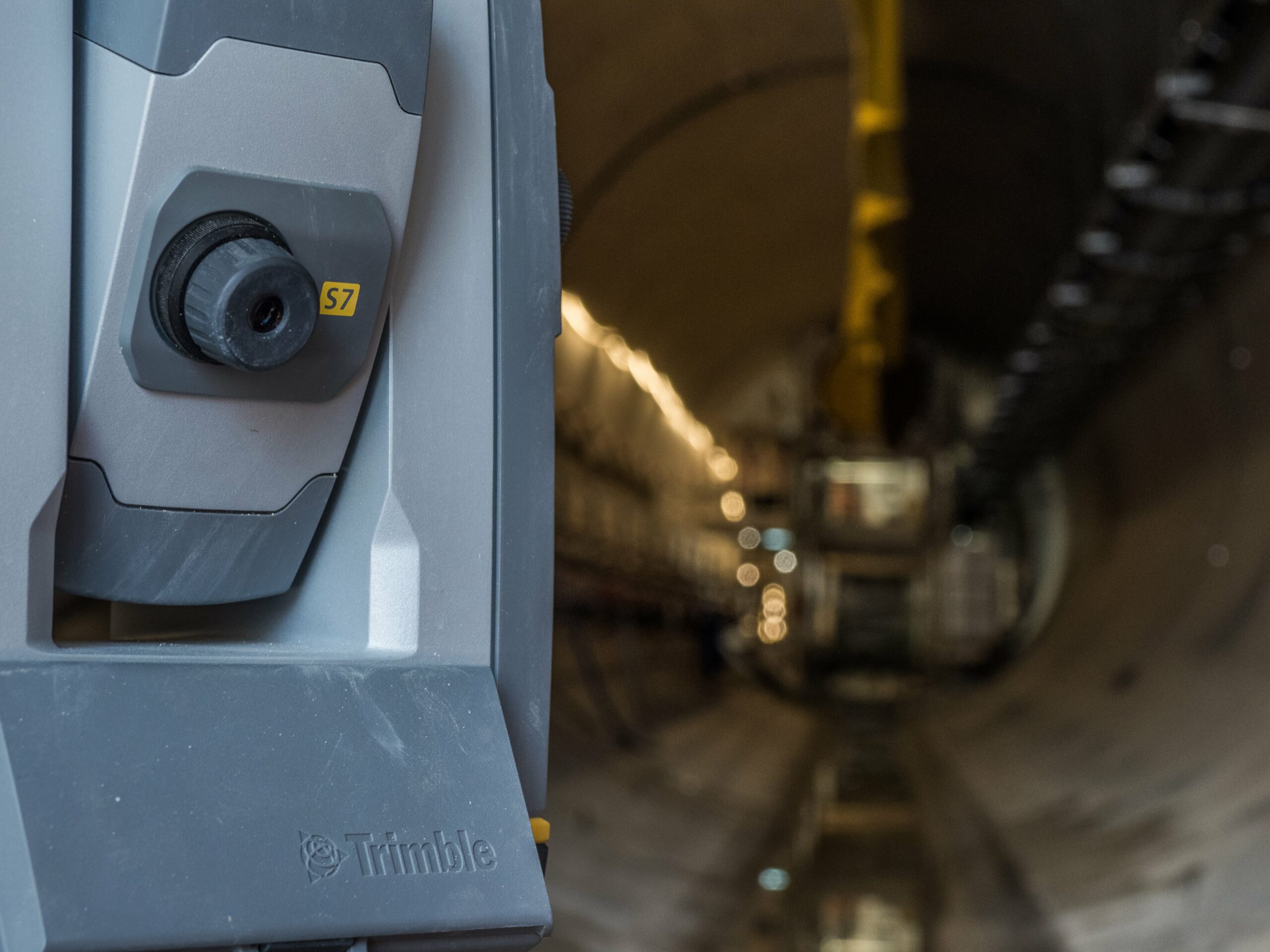 At the L15B tunnel site, Eiffage GC and Razel-Bec installed a Trimble 4D Control monitoring system (T4D), including 25 Trimble S7 total stations that feed measurements to a T4D server for data storage, processing and network adjustment. To ensure continuous measurement data for the analysis software, teams installed Settop M1 wireless communications hubs at each total station. In the event of internet disruption, the hubs automatically continue the measurements, buffering the data for transfer to the T4D server once communications are restored.

Through these hubs, the monitoring team can remotely operate the total stations and access on-board cameras, a vital feature for the team. For example, if the monitoring system can’t measure to one or more of the target prisms, remote operators can use the instrument’s camera system to see what the telescope is seeing in real-time. This helps determine if a prism has been lost, the view has become obscured, or if the instrument crosshairs are not pointing close enough to the target. The live video reduces trips to the site to check on targets.

The L15B work site and surrounding structures to be monitored are in a densely developed area and it was often difficult to establish or find project control in view of some of the total stations. So, the teams formed a network of stations, another option provided by the T4D solution. With multiple total stations sighting common control points, the software uses least squares network computations to leverage the multiple instrument locations and optimize performance and accuracy.

Eiffage GC surveying engineering manager Filipe Afonso said the monitoring teams mounted total stations on standard safety supports, solid posts, utility poles and building façades. When mounting on buildings, especially homes, Afonso said the silent operation of the magnetic drive of the S7 total stations was a plus. Some robotic total stations can be quite noisy when going through their scheduled measurement cycles, and no one wants more noise outside their bedroom window. It only takes one resident to complain about noise and an instrument unit might need to be moved, disrupting monitoring activities.

Surveying in the Tunnels

Eiffage GC and Razel-Bec also partnered on the construction of the L14 South line—an upgrade to rail access between the city and Orly Airport. The L14 South tunnel is being constructed using a tunnel-boring machine (TBM). The underground work included as-built surveys by total station and scanner on the access trench and associated facilities used by the TBM, as well as measuring each tunnel ring—the segmented concrete rings that line and support the tunnel walls.

The as-built surveys serve multiple purposes. They check fidelity of the bored and lined tunnel rings to the design plan, providing construction crews with timely and precise measurements for the finishing phase. The surveys also provide feedback to the TBM operators on how well they are controlling the machine to conform to the design. With precise measurements, adjustments can be made to improve quality as the TBM progresses along the route. Again, Eiffage GC and Razel-Bec needed to automate surveying processes as much as possible if they hoped to keep up with the tight schedule. 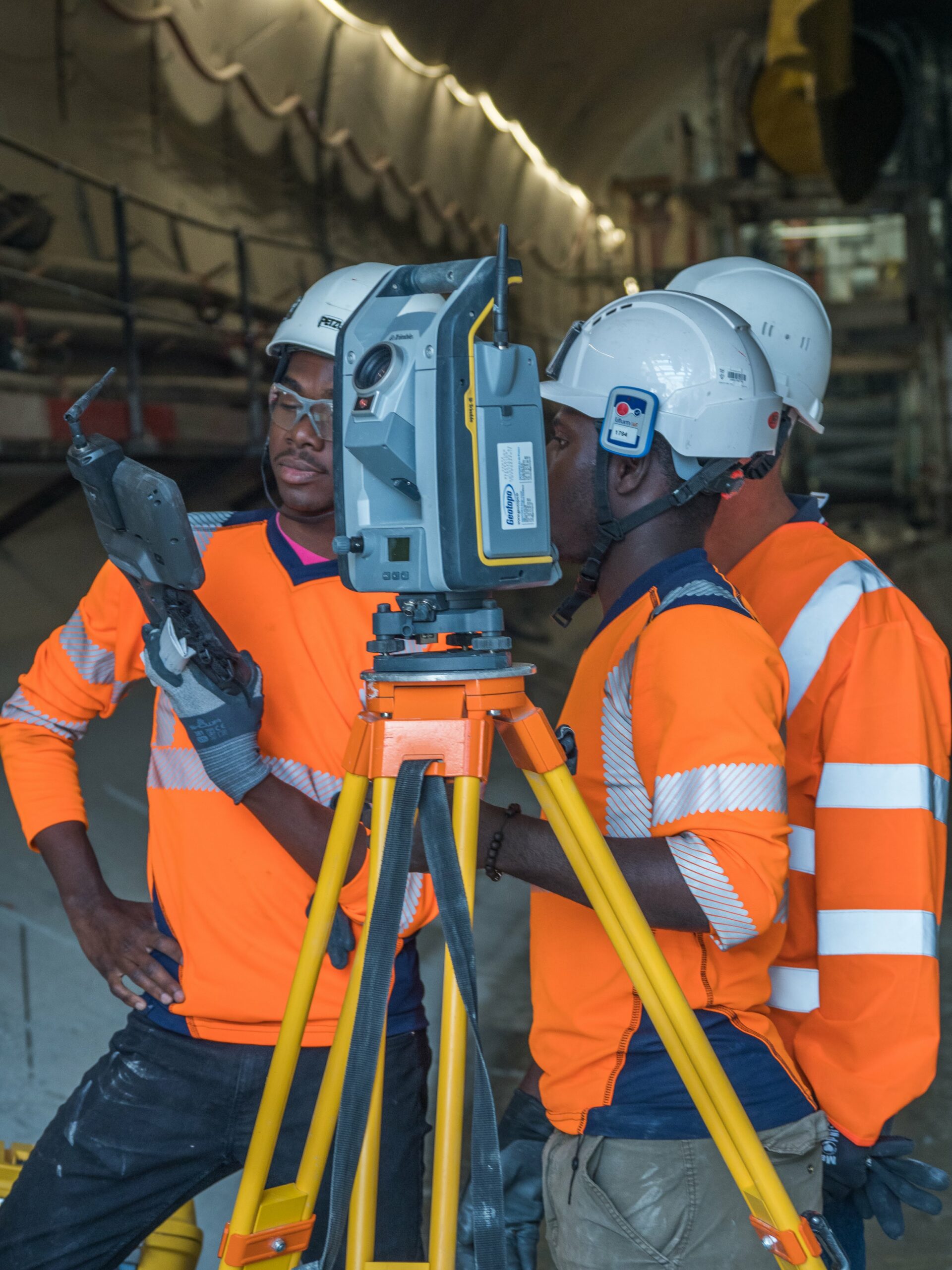 Eiffage GC’s Olivier Gauche is a survey engineer with 30 years of experience. He is using the Tunnel Module for Trimble Access software, which includes a solution specifically designed for automatically measuring and analyzing arrays of points on the inside of the tunnel rings. The Trimble Access software controls the total station to profile the tunnel rings at specified intervals. For example, it can shoot 20 to 30 profiles at one-meter stations along the tunnel alignment, and every 20 cm around the ring—all this at a rate of 10 to 15 points per second.

In the L14 South tunnel, Gauche can confirm the integrity and proper placement of the arched tunnel lining by using underbreak/overbreak analysis routines in Trimble Access. The software compares measured data to the designs and provides the results immediately on-site.

“In the office we use Trimble Business Center (TBC) to compute the traverse, check and average measurements,” said Gauche. “And we use the TBC Tunneling Module to create alignments and templates and transfer them to Access.”

“We measure control points to check the convergence of the ring and determine if the tunnel is moving,” said Gauche. “We use it to survey the vertical wall, ceilings and floors in the subway station. We have used it to perform tunnel profiles as well.”

The SX10 is also used to scan sections of the tunnel and associated structures; and the resulting point cloud is compared to the design model in TBC.

Gauche said the transition to the new instruments and software went smoothly.

“We have integrated new technologies to the way we work by making this choice. We could not go back to our old ways after this experience,” said Gauche.

Project owners around the world are pressuring construction and engineering teams to use modern, digital approaches to engineering design and construction. This includes Building Information Management (BIM), 4D BIM to manage schedules, and connected construction practices to increase collaboration and shared data throughout projects. Stakeholders recognize the value of these tools and solutions to avoid rework, change orders and related delays. The high-tech approaches used by Eiffage GC and Razel-Bec are coming into mainstream use, and projects such as the Grand Paris Express and HS2 (the second phase of high-speed rail in the UK) are proving grounds for new solutions, processes and workflow-enhancing technologies that are delivering savings in time and costs.

The monitoring and as-built surveying automation adopted for Grand Paris Express tunnel sites by Eiffage GC and Razel-Bec have already yielded improved timelines and richer data than legacy tools and methods used on previous projects. Based on this success, they are looking to deploy these solutions at other Grand Paris sites, and beyond.

Eiffage GC and Razel-Bec are confident automated surveying and monitoring for tunneling has not only reduced total time spent surveying, but also can rapidly identify potential issues and provide measurements to refine and streamline other construction activities. Their experience demonstrates that progress can be made—one site and one workflow at a time. There is no panacea (yet) for all cost and scheduling woes for large projects. But as construction firms succeed in raising efficiency in individual project elements, the tide can begin to turn.