I had the good fortune to be deeply involved with a pioneering vendor of 3D laser scanners and point cloud software. As I consider where that technology is today – a multi-billion dollar per year industry, the valuable benefits it has delivered to so many organizations and individuals, and its continued upward trajectory –- it’s fun to reflect on how it all started. In Part 6, I dive into the first product launch.

I first came across Cyra Technologies, a small start-up that was pioneering 3D laser scanning technology, in 1996 while I was working at Trimble’s Sunnyvale, California, office in “Silicon Valley.”

Ben Kacyra, Cyra CEO and co-founder, had approached Trimble looking for a potential strategic partner to help commercialize Cyra’s fledgling technology by taking on manufacturing, global sales, distribution, support, and other aspects. Kacyra’s inquiry landed on my desk, and I began a lengthy process of evaluating the novel technology and the start-up company.

Almost every aspect of my evaluation was encouraging. Along the way, Kacyra started to recruit me to join the start-up, which I eventually did in March 1998 after all beta test users had signed off on their systems. The systems were ready to be promoted into the general market; my marketing roles at Cyra were to help take this new technology into the market and help Cyra secure a global strategic partner.

When I joined Cyra as employee No. 20, I was the only marketing person. The company had no sales personnel yet. It was time to roll up my sleeves and get to work marketing this amazing new technology to an unaware public. 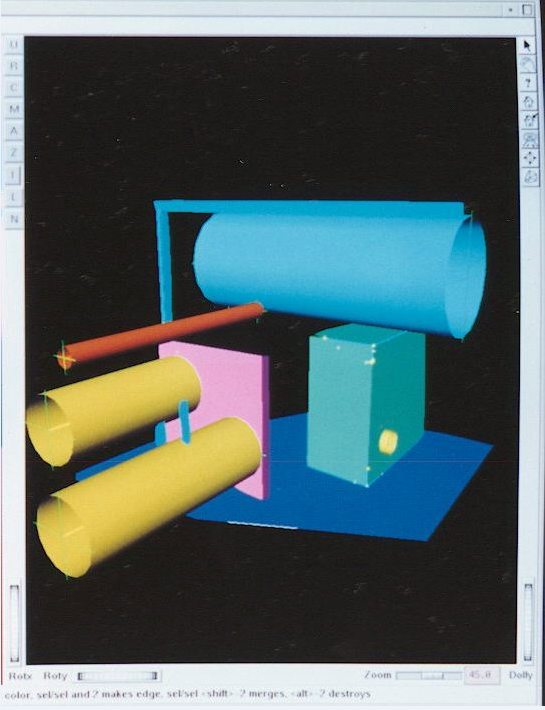 At product launch, the only workflow for processing point clouds into deliverables was to model point clouds into simple geometric objects and then export those models via DGN to CAD applications. Image courtesy: Ben Kacyra

Getting on with Marketing the Technology

My career at Trimble had been in product management and product marketing, so I was familiar with the basics needed to market survey instruments and software. The starting point of making the broader target market aware of this new technology was a proper press release sent to the right trade publications.

In 1998, the Internet was just starting to get traction. Google wasn’t founded until September 1998, six months after I started at Cyra. Email was, likewise, just starting to ramp up. Yahoo email had just launched in October 1997. It wasn’t until 2000 when email went from nice-to-have to must-have.

In 1998, press releases were still sent as hard copy – along with a 35 mm slide picture of the product – to publication editors via traditional mail. If an editor liked the release – and the photo – then a trade publication, like xyHt, would include it in the magazine’s “New Products” section. That publication, hopefully with some nicely edited version of Cyra’s press release, would appear in readers’ mailboxes about a month or two later.

The task of providing a picture of Cyra’s laser scanner that would appeal to a magazine editor’s eye was non-trivial. Cyra’s scanner was literally a black box, with a window in the front for the laser and return laser energy to pass through. By industrial design standards it was ugly. Very ugly.

To try to come up with an appealing image, I arranged for a “photo shoot” with a professional photographer at his studio. Fortunately, when the photographer set up his lighting for the photo shoot, the front window had a purplish tint to it. He added a background image of an industrial plant (since that was the original application for Cyra’s 3D laser scanner) and voila! We had an interesting image to go along with the press release text.

We sent the release to dozens of trade publications and bingo! We achieved excellent coverage in almost all of them, including many with that 35mm slide image.

To respond to prospective customer inquiries and to properly support a product rollout, we also needed a data sheet and spec, product name(s) and ordering information, and price sheets for (eventual) sales reps.

The day that I started at Cyra, I was in for a surprise: none of that formally existed.

Cyrax laser scanners and software had been sold as part of the company’s beta systems program. The four beta partners were Chevron, Raytheon Engineers & Constructors, Fluor Daniel, and the U.S. Navy. Looking first for a set of specs that I could run with for a data sheet, I was steered to the beta program proposals for the beta users. They were more like proposals from a consulting engineering company to a prospective client than they were typical data sheet/spec stuff. Kacyra’s roots prior to co-founding Cyra Technologies were in engineering consulting, so that type of documentation wasn’t totally surprising. Nevertheless, it was a challenging starting point for putting together product data sheets for both the laser scanner and software that surveyors and other professionals would expect to see. 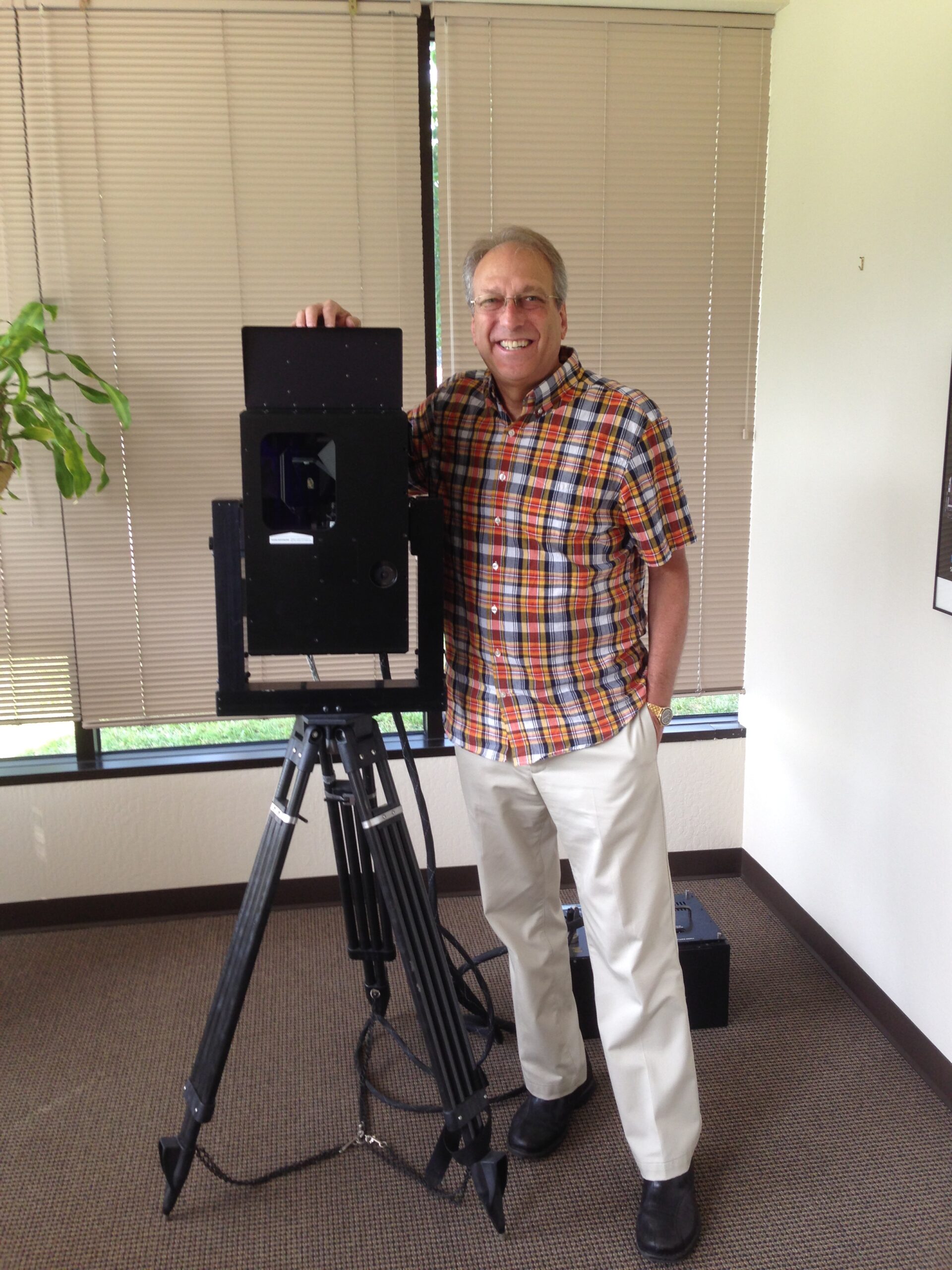 The author with the original Cyrax 2400. The Cyrax 2400, including its electronics and power supply box, weighed 112 pounds (51 kilograms) 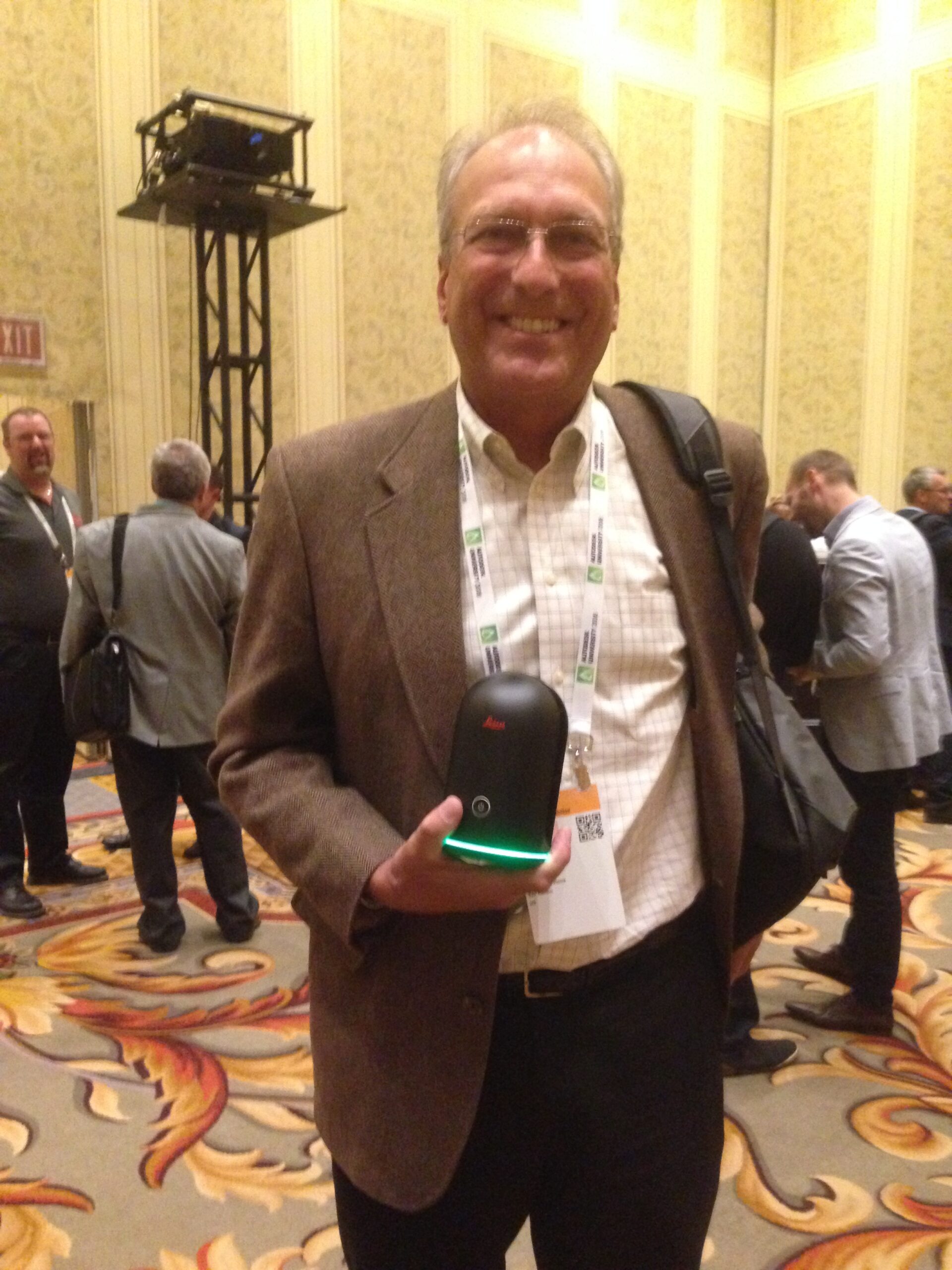 What’s in a Name?

The name that Cyra had used for the original Cyrax laser scanner in their proposals and that Kacyra freely used when referring to it was “Cyrax Mark I.” I’d been involved in naming products for much of my career and I had to inform Kacyra that “Cyrax Mark I” was not going to fly. I explained my reasoning: if you name something “Mark I” the first reaction of a prospective buyer is “When is Mark II coming?” The “Mark I” name itself would instantly “overhang the market,” as customers would hold off buying, expecting “Mark II” soon and that it would be notably better than Mark I.

I was hesitant to be firm with my new boss, Kacyra, about my product naming concern so soon after starting work there, but I felt strongly about it and Kacyra understood my concern.

As background, I was well aware of Trimble’s product names for its then high-end GPS receivers, e.g. 4000SSE, and other survey instrument names from Leica, Topcon, and Sokkia. On top of that, in 1998 many technology products were being named “something2000,” as the very-big-deal millennium year 2000 was approaching. So, wanting Cyra’s laser scanner product name to sound forward looking, but not just “2000,” I proposed “Cyrax 2400.” And that was that: Cyrax 2400 it was.

Creating a data sheet and specs was critical path to actively marketing Cyra’s products. Specs not only inform a prospective buyer what they would be buying – and from a legal standpoint what the buyer can use to return equipment should it not meet those specs – but vendors also use specs to favorably differentiate their product from competitive products.

Likewise, vendors often omit certain specs that can be used against them in a competitive selling situation. Coming up with a good set of specs for Cyrax 2400 and CGP software, especially for new technology where those specs will be precedent setting, was an important task.

For the laser scanner, I used then-current data sheets and specs for other vendors’ total stations as a reference point for what prospective buyers would expect to see. I also searched for data sheets and specs from the other known laser scanner vendors at the time – Mensi, Riegl, and KT. Like Cyra, they were all small companies. I also needed to generate a data sheet and specs for Cyra’s software, called “CGP.” I used Cyra’s Beta systems proposals as a starting point and then-current survey software specs as a reference.

Looking back at those original specs today, first published in early 1998, it’s easy to see how amazingly far the technology has progressed. 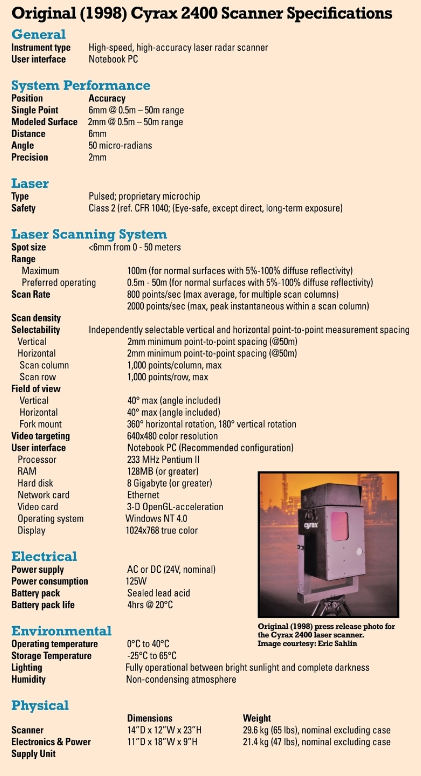 Cyra Technologies was acquired by Leica Geosystems in 2001 (in an upcoming article I’ll provide a behind-the-curtain look into how that came about), so for comparison purposes on a few key spec items here, I’ll compare the original Cyrax 2400 with three current Leica scanners: BLK360, RTC360, and ScanStation P40. Other laser scanners in the market today will also show dramatic improvements for many spec items compared to the breakthrough Cyrax 2400 laser scanner.

Size & weight: the Cyrax 2400 was comprised of a laser scanner and separate electronics and power supply unit. Combined weight was 51 kilograms (112 pounds), excluding a required laptop user interface. Units were shipped on pallets. Compare that to a BLK360 (1 kilogram or 2.2 pounds), an RTC360 (5.35 kilograms or 11.8 pounds), or a Leica ScanStation P40 (12.65 kilograms or 27.9 pounds). Remarkable.

Accuracy/noise: While orders-of-magnitude improvements have been made in size, weight, scan speed, and field-of-view, one signature aspect of the original Cyrax 2400 stands out as almost unchanged since it splashed into the market. It produced remarkably accurate, low noise scan data. Its accuracy spec is better than a BLK360; the RTC360’s and ScanStation P40’s accuracy and noise specs are only slightly better – not orders-of-magnitude like other improvements – than the original Cyrax 2400. Mr. inventor, Jerry Dimsdale, take a bow.

I haven’t written much yet about software, but obviously it’s critically important. Cyra’s one-module software – CGP – was used to control the scanner (via ethernet laptop connection), view scans, measure, register multiple scans to each other, and process scans into geometric objects like planes and cylinders. Those geometric objects would then be exported as DGN files to CAD applications, like AutoCAD and MicroStation.

That was it. That was the one and only workflow. You couldn’t import scan points into CAD systems – files were far too large for any CAD system back then to handle. Likewise, there were no panoramic point cloud/image viewers. There were no plug-ins for CAD. The only point cloud software available was what scanner vendors offered – and those were limited in functionality.

Many of you reading this article are familiar with today’s laser scanning systems and capabilities. Imagine, for a moment, if your scanner weighed more than 100 pounds, was several times larger than your current scanner, and scanned 500 to 1,000 times slower, with only a 40-degree-by-40 degree field-of-view per scan. Imagine that you only had one workflow – the one described above – to create useful deliverables. Would you be able to use such a system? What applications would be realistic to use such a laser scanner for? And what if the price of the system and its software was  greater than $180,000? Would you buy one?

That was the scenario in 1998. This breakthrough technology was remarkable in what it could do and its “potential” going forward, but marketing and selling it so that users could genuinely benefit from it was another story … a huge challenge that we were taking head on.

In the next article … First system sales: who was buying, why, and how did it go? 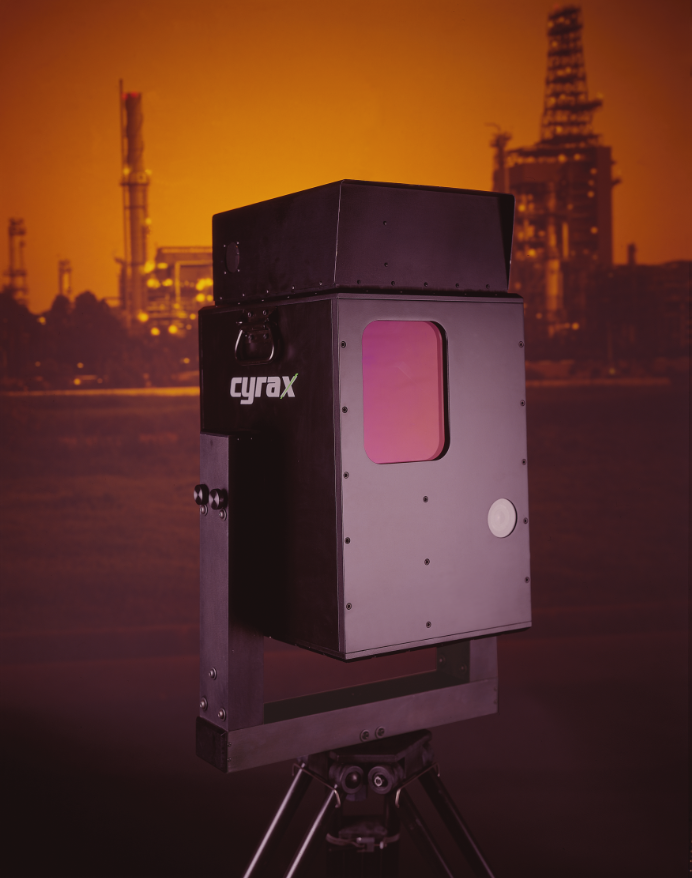