It’s already over the wheat and the oats

If you grew up near a major river in the United States—especially the mighty Mississippi—country music legend Johnny Cash’s ballad about surviving the Mississippi River Valley flood of 1937 probably hits home.

A survey by Infinity helped identify areas of erosion, oxbowing and breaching to create a plan to further protect the Huey Wildlife Management Area from Pecos River flooding

When one of our great rivers floods, it makes national headlines. But there are hundreds of other large rivers, like the 730-mile Pecos River that flows through New Mexico and Texas into the Rio Grande, where flooding creates problems for area residents but the news doesn’t get much attention beyond the local media.

Artesia, New Mexico, legendary in high school football, nudges up to the Pecos River about 20 miles north of where the Brantley Dam impedes its progress to form the great recreation area of Brantley Lake. The area around the small town of 11,000 or so residents in southeastern New Mexico near the Texas border is one of the state’s biggest oil and gas pockets and those industries drive the local economy.

The terrain here is mostly flat, nothing like the rugged Rocky Mountains of northern New Mexico or the sharp canyons of the Chuhuahuan Desert in the south. This land is sparse but not dry thanks to the Pecos, the river once considered to separate the rugged, lawless desolation of the Wild West with the civilized America of the 19th century.

Spanish explorers used the Pecos to navigate through Texas and New Mexico. The Spanish verb pecar means “sin” or “to sin” and many cowboys were referred to as “pecos” for their rough and rowdy actions.

Its role in history also tells us that the Pecos is prone to escaping its banks. Today, living down by the river could be considered good or bad in Artesia, depending on the size of one’s house…or van. There is always fear in the back of residents’ minds when they see lightning, hear thunder, and the freshening breeze carries in the smell of rain. Locals can’t help but wonder if each arriving storm is going to be another “big one,” like those of recent years or the 1954 flood when the Pecos crested at 96 feet. 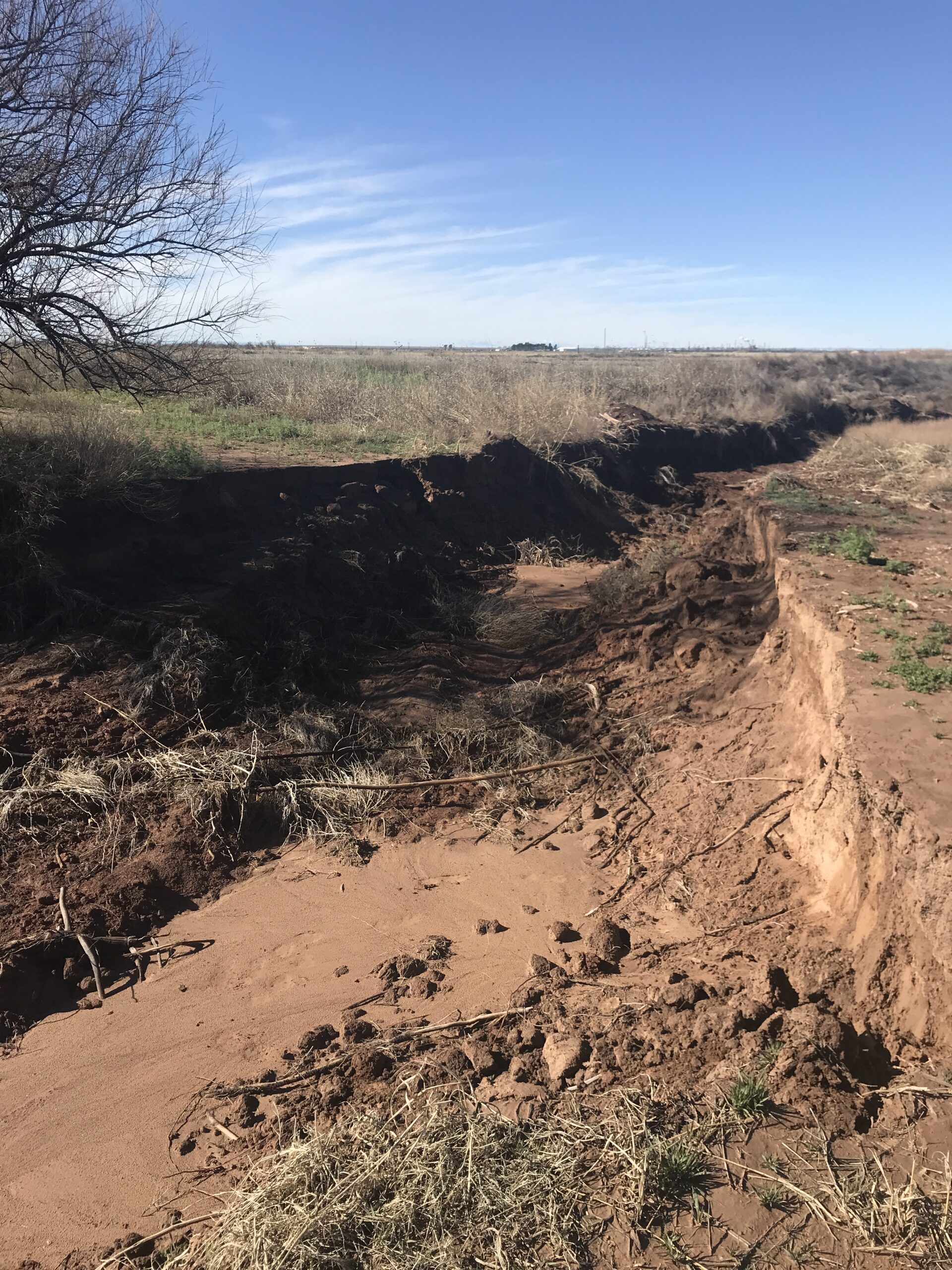 In 2019, Pecos River floodwater poured into an old riverbed, bypassing the designed spillway back to the river and creating a huge washout area.

The Need for a Survey

Two miles east of Artesia the William S. Huey Wildlife Management Area straddles the Pecos. Once a 2,880-acre ranch, it was purchased by the New Mexico Department of Fish and Game (NMDFG) in 1986 and dedicated to mitigate habitat loss caused by construction of the Brantley Dam in the late 1980s. Within the Huey WMA, the game and fish department tried to create a habitat for mirgrating waterfowl as well as engineer a solution to the flooding problems that historically plagued the area.

The NMDFG hired civil engineers and land surveyors from Ducks Unlimited, a Memphis, Tennessee-based nonprofit dedicated to the conservation of wetlands and associated wildlife habitats, to survey and design a system of levees, ditches, irrigation structures, and ponds to create the habitat and alleviate damage caused when the Pecos floods, as it did in 2014, 2017 and again in 2019.

The initial work was done in 2018 to create a ground base topographic map for design and planning purposes. This was no easy task as this country is covered in thick brush, cattails, holes, cross cuts, big rocks and hazardous wildlife like rattlesnakes. Then there was the mud. Frequent rain soaked the clay soil so thoroughly that vehicles became easily stuck and when traveling by foot boots collected 10 pounds of mud every 10 feet it seemed.

The next phase was bringing the survey crews back to stake out the new structures, ponds, levees, and roads. This was a much smoother process as the equipment operators from NMDFG had cleared all the brush and leveled the areas where staking was to commence. Construction went well, and the project was completed in 2019 ahead of planned deadline. That turned out to be fortunate as the Pecos flood of 2019 was even bigger than the 2017 flood.

In March of this year, my company, Infinity Land Surveying, LLC, was called in to survey the damage and identify areas of erosion, oxbowing, and breaching. We were prepared for the worst, having been told by the NMDFG farm manager that the levee and all of the ponds that had been built the year before were taking on water. He informed us that the river had risen up over the banks and caused heavy erosion that needed attention.

The equalizer pipes in the ponds were obviously not designed to carry this much water, so the water flowed over the levees. The levees were engineered for this and they held strong. When the water subsided, the equalizer pipes eventually drained out all of the excess water. This high-water flow did create some erosion problems despite the engineering efforts, especially on the “out” end of the pipes. The water was moving so fast it pushed all the rip-rap out and eroded huge holes in the side of the bank.

There was another area where the water had pushed a new pathway through the ditch sidewall and got into a two-track farm road. After a few hours, the water had carved four-foot deep ditches and cut off two other ranch roads before finding its way back to the main river channel.

The NMDFG farm management team showed us the worst damage so we could map those areas appropriately. It was interesting to listen to their stories about all the different floods through the years. One employee told us his field hand would never work for him again after he convinced him to go out in his canoe during a flood. They tipped over and he thought he was going to drown before realizing he was in only three feet of water. I don’t think the dangers are in the depth, but more in the speed of the water and the debris that comes with it. 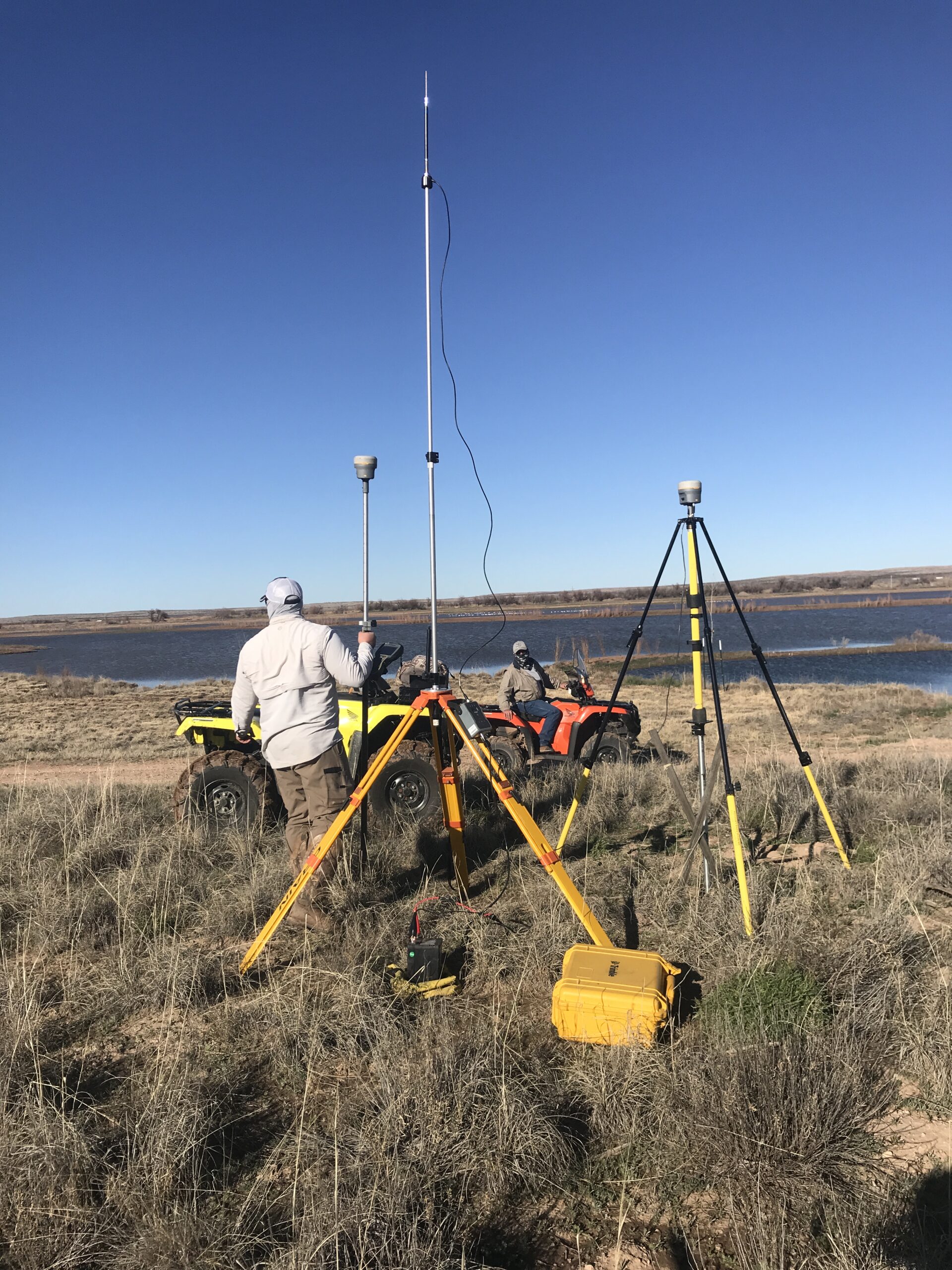 Using GPS and a robotic total station, we surveyed, mapped, and photographed all flood damaged areas and created a high-tech CAD-based “story map” to relate our findings to the design team back at Duck Unlimited headquarters.

The evidence we collected was used by the Ducks Unlimited engineering team to design more flood structures and to decide what kind of material works best for back filling breached banks.

We finished our survey after two days and sent it off to the civil engineers to make adjustments and get the proper repairs scheduled.

You can’t tame Mother Nature but you can engineer fail points to keep people and wildlife safe. This project was an example of just that. It did not keep the waters from overtaking the banks and ponds, but it did what it was designed to do and saved thousands of dollars and the lives of many waterfowl.

As a surveyor, you always hope your work makes a difference and jobs like this really benefit the local community and wildlife. 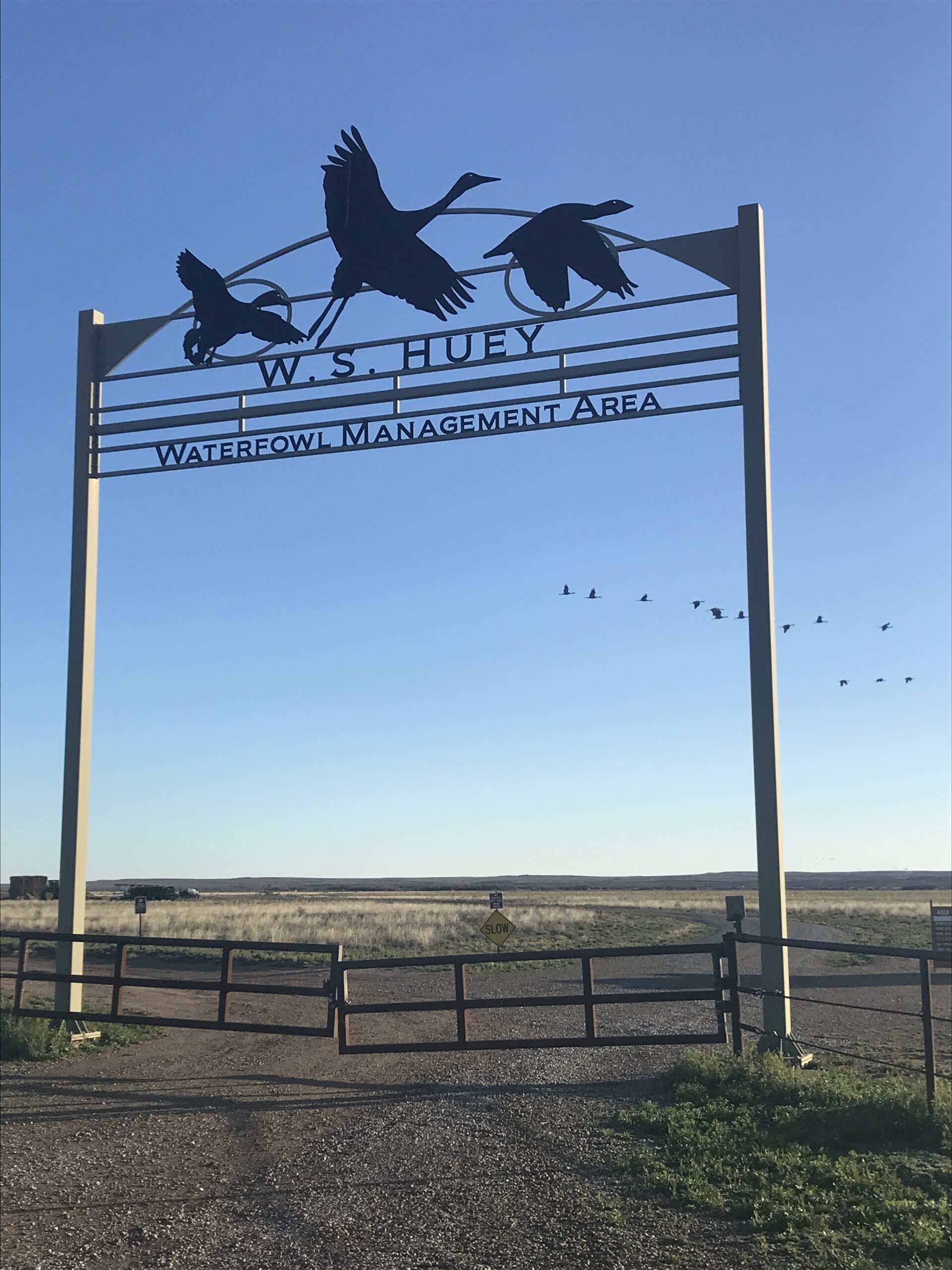 The W.S. Huey Waterfowl Management Area was created in 1986 by the New Mexico State Game and Fish Department to create new habitat for waterfowl.