This is the third article in our series introducing you to scientists and technologists who work in pursuit of early-warning capabilities for earthquakes and volcanoes—in the increasingly aligning fields of seismology, geodesy, and surveying. You can access this series on our website by searching the author’s name.

Since June 2012, he has been director of geodetic infrastructure at UNAVCO, Inc., a non-profit university-governed consortium that facilitates geoscience research and education using geodesy. Previously, he was a professor of geosciences for nearly 25 years, most recently in the Department of Earth and Environmental Sciences at the University of Texas at Arlington.

Professional land surveyors and other surveyors who support the building of large engineering infrastructure—such as roads, dams, and bridges—have always used National Geodetic Survey (NGS) benchmarks and referenced their surveys to those fiducial points.

“In the last decade,” Mattioli says, “NGS, as well as various states—particularly California—have moved to an active spatial reference network, as opposed to one that depends on position estimates at some fixed epoch in time. That means that they’re defining not only the nominal position of some benchmark; they’re also defining how that benchmark is moving in space as a function of time.”

This is important, he argues, in places that are deforming substantially, especially when building very large, critical infrastructure, which requires knowing the positions of structural elements to better than a centimeter. This can only be achieved by referencing an external frame.

“In the past, most surveyors have let NGS define both the horizontal frame as well as the vertical frame. Both of those things are being redone.”

NGS announced in February that it is moving toward a model of an active spatial reference network for the entire country, to be implemented by 2022. (See xyHt‘s December 2017 cover story by Dr. Dru Smith.)

One way in which geodesy, seismology, and surveying intersect is when there is significant ground displacement in parts of a country due to a large earthquake— such as magnitude 7.5 or greater. For example, in the 2010 Maule earthquake in Chile, large sections of the coastal area near the epicenter moved several meters.

Then, Mattioli points out, the question becomes how to relate those motions into a cadastral survey for the entire country and make the appropriate corrections in order to maintain a consistent frame of reference.

In general, the precision of a surveys depends on the value of the land or of the structure that’s being built. Staking out a large area for potential development in rural Alaska, for example, does not require very precise control over its boundaries, while building a dam requires knowing the starting coordinates with very high precision. Mattioli defines high precision in this context as anything sub-centimeter.

Seismology, on the other hand, is always focused on relatively short-term deformation associated with an earthquake.

“What has occurred in the academic geophysical community, and is beginning to occur in the operational hazards community, is a merging of GNSS observations with seismological measurements of strong ground motion. You can take information from an accelerometer, for example, which measures the local ground acceleration, and combine it with an absolute 3D position estimate from GNSS.”

“When we have extremely large earthquakes, what we really need to understand from a physics perspective is the initiation and dynamics of the rupture: why it propagates, what controls the propagation direction, and why it eventually stops rupturing,” says Mattioli.

Understanding these basic questions also informs the hazard and will contribute to operational warning systems.

One way to determine the magnitude of an earthquake is to use accelerometer measurements. When the magnitude gets quite large, however, these seismometers in the local field go off scale. With GNSS, on the other hand, you always get a 3D position estimate, unless the dynamic motion is such that you lose lock on the satellites, which is not likely based on simulations and experiments. 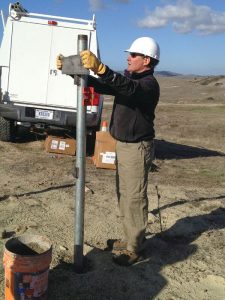 The precision of each position estimate using GNSS is inversely proportional to the rate at which estimates are taken. For example, 24 hours of observation of something that’s nominally static can yield a position estimate on the order of a few millimeters, after averaging all the observations and averaging out other effects, such as multi-path and atmospheric variations. Conversely, estimating an absolute position every second degrades the estimate’s precision.

“Using absolute point positioning methods and rapid or estimated clocks, you can see the surface waves as they propagate during the actual earthquake event.

“If you combine 1 hz GNSS observations with the seismological determinations at the same location, which are usually done at somewhere between 50 and 100 hertz, you can better constrain the rupture dynamics and the magnitude and mechanism of the earthquake event. This is the direction that operational hazards agencies are now trying to put into practice going forward.”

Just before the March 2011 magnitude 9 Tohoku earthquake in Japan, the Japan Meteorological Agency, which is responsible for running the country’s very large GPS network, was about to go live with a system that would use GPS in order to better constrain earthquake magnitudes and provide early warnings. Since that earthquake, many academic research groups and staff at national labs and the USGS have demonstrated that the estimate of that earthquake could have been improved through hindcasting.

“Now, many of these groups are trying to fully integrate GNSS observations with seismological observations in order to produce a better derived product related to an individual earthquake,” says Mattioli.

UNAVCO is consortium of more than a hundred universities in the United States and more than a hundred foreign associate members, mostly universities as well, distributed globally. It is also a nonprofit corporation that operates the National Science Foundation’s geodetic facility on behalf of them under a cooperative agreement. UNAVCO maintains a significant number of permanent or continuous GNSS stations across the globe.

The largest network it operates, the Plate Boundary Observatory, consists of more than 1,100 stations distributed from the Aleutians through the western United States, primarily concentrated in Washington, Oregon, and California and through the eastern part of the United States into a station in Puerto Rico.

UNAVCO, along with regional partners, has other, similar networks: one in Mexico called TLALOCNet and another one in the Caribbean called COCONet. It also operates stations in Greenland and Antarctica, as well as keeping NASA’s global geodetic network operational.

“Most of the NSF support to keep PBO operational has come through a very large project called Earthscope, an over $500M project, of which $200M was designated for PBO.”

Mattioli notes that the EarthScope project will sunset in September 2018. The PBO stations were not initially designed to operate as part of a hazards-based network.

For more in our Shifting Ground series, read: