This entry is part 3 of 8 in the series xyHt in print February 2016
Above: Users in the field can pair the inReach wirelessly via Bluetooth with a smartphone or tablet to provide a dashboard control panel for the unit and facilitate easier typing and messaging. Credit: DeLorme

Satellite communication technology provides a critical lifeline for teams working off the grid.

Editor’s note: Cellular coverage is not as ubiquitous as the television ads might like us to believe. Missed or delayed communications can be costly, and, more importantly, hazardous. Our crews are asked to be more productive than ever before, but any amount of tech wizardry they employ to meet these increased expectations may be pointless unless they are reachable at any given time to be safe all of the time.
We hear these concerns at conferences and have looked at several crew safety/communications solutions—most are cellular-based. Satellite phones are typically costly to deploy for all crew members, and it is often difficult to integrate a location component. However, there is an affordable sat-short-message-based solution, so we asked contributor Howard James, who is familiar with the DeLorme inReach, to describe how the two-way satellite communicator works.

Surveying, mapping, and construction teams in the field can be vulnerable to accidents, illness, or other dangers that may require an urgent response. Often, their work may take them to remote locations that are “off the grid,” beyond the reach of wireless networks. This means mobile phones are useless, and so are other solutions that rely on cellular connections. The only way to communicate is either two-way, push-to-talk radio (which is limited in range and vulnerable to interference and signal blockage) or through satellites.

Choices are limited when it comes to satellite-based solutions. Satellite phones can provide full two-way voice telephony, but equipment and airtime service costs are high. At the other end of the spectrum are one-way satellite SOS beacons. While they are less costly, these simple transmitters provide one-way communication only with no return channel to communicate back with the sender.

inReach users can pair the device with their phones and tablets, and they can communicate with SOS responders.

DeLorme is known as a supplier of maps, electronic cartography, and GPS products for both professionals and consumers. The company’s XMap software is used throughout surveying and geospatial professions. About four years ago, DeLorme decided to expand beyond its cartography and GPS focus to launch a line of personal satellite communication devices integrated with GPS technology.

Satellites to the Rescue

inReach is handheld, about the size of a recreational GPS unit, but it can communicate through the Iridium satellite network. It weighs 6.7 ounces and is MIL STD 810F compliant and IP67 water rated. It automatically transmits its GPS coordinates at pre-selected intervals, allowing authorized followers to view its position and movements on a map online. Authorized followers can “ping” the device at any time to request a position update. Users can also exchange 160-character SMS messages with any email or phone number. All messages are tagged with the user’s GPS coordinates. The dedicated SOS button, when activated, immediately sends a distress alert to a response center with receipt acknowledgement. 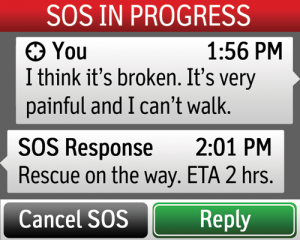 These satellite communicators are offered in two versions: inReach SE and inReach Explorer. The inReach Explorer model has additional built-in navigation features, including a digital compass, altimeter, and accelerometer. This allows the user to navigate from point to point, create waypoints and routes, and retrace a “bread-crumb” trail to a previous location, enabling self-rescue.

This solution differs from other satellite tracking and SOS devices in that it is a two-way communicator, not a one-way transmitter. If a distress alert is initiated, a response is sent within minutes from the emergency response center confirming that the SOS message has been received. It also allows the responders to confirm that the distress alert is not a false alarm and to ask questions about the nature and urgency of the emergency so they can respond with appropriate resources.

Users in the field can pair the inReach wirelessly via Bluetooth with a smartphone or tablet using DeLorme’s free Earthmate mobile app, allowing them to fully control the inReach unit (which can be located up to 30 feet away). Topographic map data and U.S. NOAA charts can also be pre-loaded via the app, and text messaging can be done directly from the mobile device, using the user’s own address book.

At standard 10-minute tracking intervals, the inReach will operate for about 100 hours between recharges. It can provide up to 30 days of battery life when placed in a 30-minute extended tracking mode under ideal conditions, and it can be recharged in the field through a mini-USB port. DeLorme has tested and recommends Goal Zero solar chargers when access to power is not available for extended periods.

The DeLorme enterprise portal also enables easy integration of inReach with the organization’s existing command systems. If communications security is a concern, the Iridium satellite short-burst data signals are highly secure, but full encryption is available as an option.

An API tool allows software developers to customize the solution for specific applications and create custom forms that can be downloaded to mobile phones or tablets for data collection in mapping applications and integration with existing DeLorme XMap enterprise applications.

Importantly, SOS messages can be routed directly to the organization’s own response center or to the GEOS international search-and-rescue coordination center, which has worldwide service capabilities.