When I learned that NGS and Dru Smith (the NSRS modernization manager for the NGS) had requested to respond to my August Field Notes, I was quite intimidated. However, my fears were quickly quelled. Thank you, Dr. Smith!

As mentioned below, a more extensive and informative response on the monumental task that is the modernization of the National Spatial Reference System (NSRS) will appear in an upcoming issue of xyHt magazine. Perhaps as important as the technical details is the strong encouragement from NGS as to how we, as surveyors and users of the NSRS, can contribute to this effort as well as discussion of the programs NGS has established to assist us with doing so.

That was the premise of my HARN article, a call for action, so having NGS directly explain the benefits is a huge bonus. I thank them for seeing this as an opportunity to continue their extensive outreach as we march towards 2022 and beyond.

A Response to the Article, “Are HARNS on Death Row?”

In a recent article for Surveyor’s Field Notes, Scott Martin posed the question “Are HARNs on Death Row?” NGS would like to thank Scott for writing the article, raising this question (and others), and giving everyone a chance to consider what the modernized NSRS will look like, and especially what role passive geodetic control marks will play in the future.

A complete response to the article has been prepared and submitted to xyHt for publication, but it is far too lengthy for Surveyor’s Field Notes. However, NGS felt it was important to get the highlights of that response out quickly, and so this summary of the longer response was put together for immediate release.

In reading the article, one might gauge that the question behind the question was really, “What will happen to the HARN coordinates on HARN marks once NATRF2022 (and PATRF2022, CATRF2022 and MATRF2022) are the official reference frames of the NSRS?” Unfortunately, that answer is very long, very complicated but will be fully addressed in the longer article in xyHt.

However, one other question (in fact, the most important question in Scott’s entire article) was also asked and will be addressed in just a moment.

Before addressing that question though, here’s a brief reminder about the changes coming to the National Spatial Reference System (NSRS) in 2022. First, the three NAD 83 reference frames [NAD 83(2011), NAD 83(PA11), and NAD 83(MA11)] will be replaced with four terrestrial reference frames: 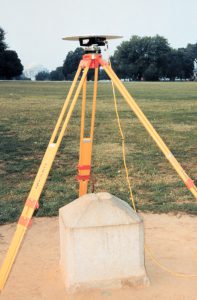 GPS antenna over Station Jefferson Pier, looking south with the Jefferson Memorial in the background in Washington, D.C.

Additionally, all vertical datums (including NAVD 88) and all related physical quantities (geoid models, deflection of the vertical models, etc.) will be replaced with a single new datum called the North American-Pacific Geopotential Datum of 2022 (NAPGD2022.)

Lastly, all of the above will be used to provide time-dependent coordinates, with both a geoid monitoring service and an intra-frame velocity model (IFVM) provided to model the changes that occur to coordinates through time.

So, to begin, the most important question asked was this:

“…should local, grassroots efforts be mounted to perform a campaign for submission to NGS through the Bluebook process or the successor thereto (part three of the Blueprint for 2022), to ensure that they will be included in NATRF2022?”

YES! NGS strongly encourages the re-surveying of historic marks. This recommendation ties in to so many efforts at NGS that a list is needed to hit them all:

With all that in mind, NGS strongly urges anyone who is interested in improving their state’s geodetic control (especially those users whose work relies upon up-to-date geodetic coordinates on passive marks) in the NSRS of 2022 to get involved in re-surveying their favorite or important marks. After all, NGS is not out there setting marks anymore. The care and maintenance of passive control is on the shoulders of the users, and that includes keeping the coordinates “fresh.” Begin by talking to your regional advisor, but also look for guidance in the next year, coming from NGS.

Aside from encouraging the re-surveying of existing passive control, a complete response to Scott’s original article must address other complicated issues, such as:

These questions and many more will be forthcoming in the full response in xyHt.

Let me close by re-iterating my thanks to Scott for writing an article that stimulated so much thought here at NGS and which shows how much importance the passive control will continue to play even as NGS modernizes the NSRS.