This entry is part 1 of 13 in the series GeoDude

Above: A backpack type of walkaround mobile scanning system was used to capture this site for a standard topo survey. Credit: Wantman Group Inc.

In Part 1 of this two-part article, I noted that walkaround mobile scanning is being rapidly adopted by the market. I described it in general and then detailed four basic types of systems: pushcart, backpack, hand-carry, and handheld. For each type, I also discussed potential advantages over competing methods of data capture.

Part 2 dives into specific applications and current “sweet spots” for each type of system. In addition, no data capture system is a panacea, so Part 2 discusses current constraints and challenges of using these systems and various ways that users address those issues. 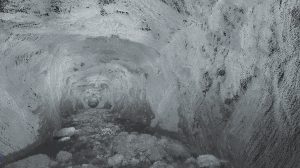 Tunnels and caves are a sweet spot application for walkaround mobile scanning. Credit: Tukuh Technologies. Right: This hand-carry system is being used periodically by a construction company to record the state and status of a project during its construction phase. Credit: North Midlands Construction.

Sweet-spot applications for walkaround mobile scanning systems vary according to the type of system. For example, applications for short-range, high-accuracy (several mms) handheld units are quite different than those for pushcart systems.

Buildings are the biggest sweet spot for hand-carry walkaround mobile scanning systems. The more built-out a space is, the more attractive mobile scanning is from a productivity standpoint. Credit: On-Point Solutions.

Because these systems are on rigid wheels and tend to be quite large compared to hand-carry or handheld systems, their main uses are on flat surfaces and large, fairly wide-open areas like factories and assembly plants.

Advantages for these applications are higher productivity and potentially higher accuracy than other types of walkaround mobile scanning systems. In many cases, these systems are used in conjunction with complementary laser scanning tools to capture areas inaccessible to pushcarts, such as small rooms and stair wells.

Many of these systems are derived from mobile scanning/mapping systems originally designed for vehicle mounting for road and urban mapping. As such, one sweet-spot application is to complement vehicle-mounted scanning.

This applies in urban areas where parked vehicles can occlude data capture or where it’s not feasible to drive, such as narrow alleys. It also applies on highways, where adjacent swales and ditches may not be effectively captured when driving. In such cases, users walk these areas and merge the walkaround scan/image data with vehicle-captured data.

An advantage of backpack systems—due to their robust GNSS, imaging, IMU, SLAM, and scanning capabilities—is their ability to be used freely indoors and outdoors. So, projects where both indoor and outdoor data capture are needed are also viable candidates for these systems.

Finally, multi-acre site surveys with relatively tall grass are also emerging as a good application. In such cases, users gain an advantage over traditional total-station or GNSS methods by using just one person—and over static scanning, essentially scanning from above the grass while walking and thus getting sufficient ground shots.

These systems are also used for site mapping when, for one reason or another, drones may not be a viable option.

This hand-carry system is being used periodically by a construction company to record the state and status of a project during its construction phase. Credit: North Midland Construction.

The main application area for these systems are buildings: 2D plans, in some cases 3D BIM/Revit models, sometimes including exterior facades and sites. Within building applications, a major sweet spot is for remodel projects, where as-built/existing conditions documents are used as an input to remodel design.

Diving down further, the sweetest spots are for buildings that are heavily built out, i.e. lots of rooms/offices, mechanical rooms, etc. The more built-out a facility is, the more cost-effective hand-carry mobile scanning systems are compared to other alternatives. Hospitals and medical clinics are prime facilities, as you also need to be able to get in and out of rooms very quickly— another advantage of these systems.

Another sweet spot for hand-carry systems is single rooms where a “quick and dirty” survey is needed to get basic room dimensions. In many of these cases, hand-carry systems are replacing the use of laser distance meters or tape/sketch approaches.

Yet another sweet spot is floor plans for space utilization planning and facility management. These systems have become so cost-effective for capturing building spaces that they are also increasingly being used for security and emergency-response purposes where first responders benefit from having accurate plans/3D models of buildings before going in.

An emerging application area is in construction. Although they’re not accurate enough to be used for most construction QA, they are proving valuable for construction-engineering input needs, practical on-site path planning (is there enough clearance between those gate posts or under that overhead wire to get a truck through?), and periodic state-of-the-site recording.

A big plus for walkaround mobile scanning compared to static scanning for construction is the speed at which data can be collected and results made available, basically the same day. This is critical for construction, as construction is “real time.” Just as panoramic 360º photos are increasingly being used for periodic site recording, hand-carry mobile scanning systems are being used for the same purpose, with the added benefit of geometry in the image/scan.

Basically, it’s walking around with the supervisor and recording what that person sees, complete with geometry. It’s an accurate record of what was where and when. The relatively low cost and simple ease of use of these systems are helping to make this an attractive option.

As the smallest and most maneuverable walkaround mobile scanning systems—and currently the ones with the shortest range and highest accuracy—these tend to be used in small or cramped spaces or for certain objects/scenes with complex geometry.

A common use is to supplement static scanners for capturing industrial plant or building spaces where it’s not feasible to enter with or easily place a static scanner. Capturing small forensic scenes and crashed vehicles is also common. Accuracy is good enough to also be used for some fabrication QA and for reverse engineering of parts with complex surface geometry. They have quickly become another tool in the kit. 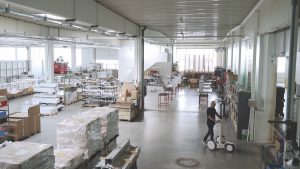 No geometry capture tool is a panacea. Here’s my take on current constraints for walkaround mobile scanning systems and ways that users are addressing these today.

Except for a couple of the very high-accuracy, handheld systems (a few mms) on the market today, almost all other systems use SLAM to one degree or another. The first challenge with SLAM that every user brought up to me is drift/accuracy.

Users tackle this one in several ways, with “how and where you walk” as number one. Walking in loops enables SLAM to adjust its overall results/registration by using the start-point and end-point of each loop as the same. Loops can be outer loops for an entire space plus inner loops for each room/office or a “flower petal” approach where the user starts in the middle of a space and conducts a 360º sequence of smaller loops each emanating from the middle.

Walking a site beforehand to plan out the walkaround scanning path is always recommended for optimal loop planning. Limiting the amount of continuous scan/walk time is another common remedy as drift accumulates over time.

Although the only skill needed to use one of these systems is the ability to walk, users need to “re-learn” how to walk when using SLAM. They need to make slow, smooth turns. They need to walk slowly enough, overall, to be able to capture sufficient point density for accurate feature extraction. Users need to be careful when someone is walking in front of them at the same pace and be careful of doors opening in front of them, as these cause problems for SLAM. Users also often limit the number of flights of stairs they do with a single walkaround scan to minimize vertical drift.

The good news here is that with experience, virtually all users become proficient at walking to minimize drift and meet project accuracy requirements. There’s no substitute for experience with these systems.

Users regularly supplement walkaround mobile scanning with independent measurement means as QA checks. Often this is a handheld distance meter and sometimes a total station, but it’s not uncommon to also use static scanners to tie multiple walkaround scans together. With some exceptions, using targets generally doesn’t help much, as SLAM uses far more scene features to align each scan-frame to the next than some additional targets can offer. Targets, of course, are beneficial when also using static scanners to aid overall registration.

Currently, the two popular scanning modules used in these SLAM systems (Hokuyo and Velodyne) each have a lot of noise/fuzz in the data —several cms—compared to most static scanners. Although vendors use averaging algorithms to minimize noise effects to aid in accurate room dimensioning, data can still be too noisy to pick out elements that may be important.

For example, small piping, guy wires, switch plate locations, etc. may not be able to be discerned or accurately located. Color, scan-intensity mapping, separate picture taking, and other visual approaches can help some, but may still not be sufficient. Likewise, some automated feature-extraction software tools, such as automated piping-extraction, aren’t useful with data that’s too noisy.

A related shortcoming of many current walkaround mobile scanning systems is the visual quality of point clouds, as far as true color texture mapping, false colorization, or intensity mapping. If you expect to see images of crisp point clouds with balanced, true colors that look like photos, you risk being disappointed. They’re great for cutting sections to create deliverables, but compared to high-end static scanning/imaging visuals they’re currently not there.

Long, flat featureless corridors are not good candidates, nor are wide, flat, featureless roads. An analogy can be made with the use of cloud-to-cloud (C-to-C) registration approaches for static scanning; C-to-C registration likes spaces with “good 3D geometry,” like industrial plants with pipes running vertically, horizontally, at different elevations, and in varying directions.

The big advantage of walkaround mobile scanning is field productivity, and that comes from not having to stop, set up, tear down, move, stop, etc. Thus, sites with lots doors that must remain closed—yet the spaces behind those doors need to be captured—are less attractive. The big win for mobile is moving continuously.

Pushcart: These systems need flat floors and sufficient space to push them. Some systems are more forgiving regarding floor flatness than others, but smooth, flat floors are a big plus.

Backpack: You can carry them or put them on other mobile platforms, but they take up a fair bit of physical space compared to hand-carry or handheld systems, so they’re not well suited to small interior spaces that are otherwise hard to access.

Hand-carry: There are specific advantages/constraints for each hand-carry system on the market, but in my view as a group, they don’t have additional, noteworthy constraints.

Handheld: Currently these systems are very short range, so they’re best used where you can be within a few feet of the objects/scenes that you need to capture.

In the big picture, yes, walkaround mobile scanning systems have their own constraints and challenges—and solutions that users can apply to address them. In the still bigger picture, the real, net benefits of these systems are often big. Very big.

And in my view, the future for this technology and users of it is also big. Very big.