HAVING GRADUATED FROM THE UNI 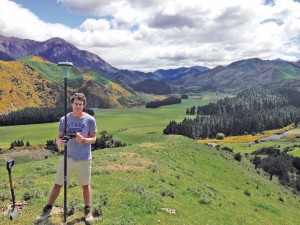 VERSITY OF OTAGO in 2010 with a Bachelor of Surveying with Honors First Class, Mark Christopher Myall is a licensed cadastral surveyor in Christchurch, New Zealand. He started his professional career with an international multidisciplinary engineering consultancy where he was involved in the legal surveying of large-scale subdivisions. Following the devastating Canterbury earthquakes of 2010/2011, Mark was heavily involved in a diverse range of surveying to aid in rebuilding the city. Although it was a difficult time, a highlight of Mark’s career was working directly with the New Zealand Fire Service, Civil Defense, and Urban Search & Rescue teams to monitor collapsed buildings for deformation while the rescue operation was undertaken.

In 2014 Mark was admitted as a full member of the New Zealand Institute of Surveyors and was awarded the Percy Dyett prize for engineering. Mark was on the local organizing committee for both the FIG Working Week in Christchurch 2016 and the 2016 FIG Young Surveyors Conference.

It is incumbent on the bright young leaders in the profession to take bold steps and provide leadership by example. Peer surveyors say that Mark takes new projects, methods, and tech- nologies full on or, in local parlance, “gives it heaps.” In December 2015, Mark co-founded Myall & Thurlow Consultants Ltd where he is a director and principal surveyor completing surveying services for a loyal client base. Mark is an active member of both the NZIS and FIG and has a keen interest in new technolo- gies and the young surveyors network.