Above: InfraWorks 360 uses engineering rules to ensure that vertical and horizontal curves in infrastructure elements have the proper radii.

Editor’s note: For many firms and practitioners of surveying, photogrammetry, mapping, and remote sensing, traditional deliverables to AEC clients have focused on the civil-design, full-on-CAD track. For planning and evaluation of design alternatives, something new–more fit for purpose–was needed to fit that niche, something between full-civil-design CAD and 2D schematic GIS, with less operational overhead than the former, yet richer and more versatile than the latter, and in full 3D. Here we describe prominent software designed specifically to meet those needs. Traditionally, architectural and engineering projects begin as sketches, are then designed in detail in CAD, and then translated into visualizations that are much more accessible to non-technical clients and stakeholders. Autodesk’s InfraWorks 360 3D design and communication platform eliminates these costly and time-consuming steps by enabling EAC professionals to run projects from beginning to end in a single environment.

One solution available in the market is Autodesk’s InfraWorks 360 3D design and communication platform. The software is particularly adept at answering “What if?” questions by quickly building a model and displaying its context.

“you would have to take what you see on the screen and re-work it into something that made sense to a client or a city council. When you are working in InfraWorks 360, it is already there.”

Tools in the program enable users to build a context “pretty much out of thin air,” says Chappell, and then let them design in more detail roads, grading, buildings, bridges, water features, etc. Users can evaluate those designs with their clients and community partners, explore whether they work from an engineering standpoint and meet zoning requirements, and explore multiple alternatives for a project. For example, where two roads cross, is the best solution a standard intersection, a round-about, or a bridge? Users can explore several options in a few minutes, even with a client, and make big decisions early on, before construction begins. They can use tools in the software to keep multiple stakeholders informed and to collaborate with a virtual team working on an InfraWorks model from anywhere on the planet.

InfoWorks 360 is optimized for the preliminary engineering part of a project. As a starting point, a user might use the Model Builder tool to define an extent and import freely available GIS data. The program will then build a model in as little as a couple of minutes.

Next, the user can import many different types of data, including Esri shapefiles, SketchUp, and Autodesk SDF, Revit, and DWG. To do more detailed design, a user can then easily move a project into AutodeskÕs Civil3D. “Traditionally, with other tools or vendors, you scrap all of your preliminary work and start all over again with the detailed design,” Chappell says. 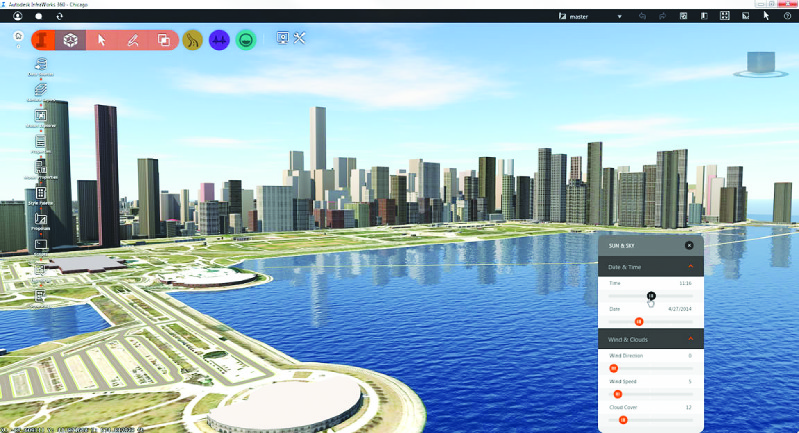 InfraWorks 360 enables users to quickly build a model and display its context.

While InfraWorks 360 is very visual, “it is not just a pretty picture generator,” Chappell emphasizes; it uses rules-based design. For example, when you pick points to make a road, it already knows that the horizontal curves need to have a certain radius and the vertical curves need to have a certain length. In creating a proposal, users can also convert “GIS roads” to “design roads,” then, for example, elevate one above the other.

Unlike in most 3D modeling software, users are adjusting points of vertical intersection and vertical curves as they are defined for civil engineered roads. If a user wants to place a bridge in a project, the software will choose the proper standard structural shapes based on the length and type of span. Depending on the user’s preferences, the software can point out where a design violates engineering rules or just fix it.

Users can also calculate such quantities as the materials required for a project to generate an estimate or the flow of a stream to decide whether it could pass through a culvert.

InfoWorks 360 “is not really like CAD at all,” says Chappell, because it is full 3D all the time.

“It is also really immersive and real. Most people can look at an InfraWorks 360 screen and know exactly everything that they are looking at.”

However, it does allow users to draw with precision and accuracy, as with CAD, because both vertical- and horizontal-curves geometry are built into the alignments, as well as the types of values that civil engineers and surveyors care about, such as cuts, fills, and volumes. The software is a true building information modeling (BIM) product, Chappell argues, because it is an aggregated 3D model with information embedded in every element that can be used to perform analytics–such as analyze the sight distance of a curve on a road section or optimize a path between two points based on core soil conditions. Supercomputers perform some of these calculations in the cloud, he points out.

InfraWorks 360, however, is more infrastructure-oriented than Autodesk’s BIM 360, which is more building-oriented. While it consumes most GIS formats, it also has tools for sharing that information with the public, including what Autodesk calls a public model viewer that can be embedded into a website and allows the public to navigate an InfraWorks 360 model. In April, Autodesk released Mobility Simulation, a tool that displays all different modes of transportation, including pedestrian transportation. It shows vehicles moving through the model and colored bars that illustrate where traffic is going to back up.

Other tools in InfraWorks 360 enable users to quickly generate drive-through and fly-through animations or capture a rendering of a certain view at a certain angle. “Recently,” Chappell recalls,

“one of our customers was working with a firm that was building a big hotel in a major city, and they wanted to visualize the view from each window in the hotel. In InfraWorks 360, you can dial in the date and time and it already knows where you are, so it will accurately model the location of the sun and the angle of all the shadows. So, our customer was able to show his client very easily what it looked like out of every window of this hotel.”

Collaboration is a native state of the software, Chappell points out, because Model Builder automatically creates models in the cloud. For secure projects, however, users can limit the storage of their project files to their hard drive. The software also includes tools for drainage, hydrology, and hydraulics. A feature currently in preview will allow users to build terrain surface from point cloud data directly in InfraWorks 360. 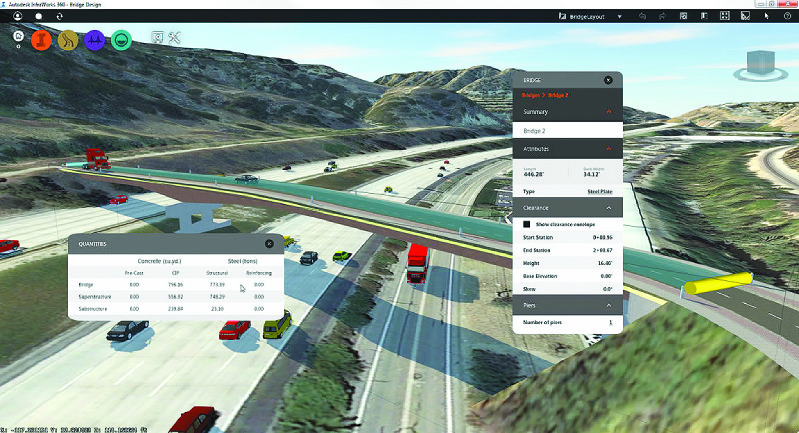 InfraWorks 360 enables users to calculate the materials required for a project in order to generate an estimate.

Autodesk plans to start using InfraWorks 360 to transform entire cities by using Mobility Simulation as a multi-modal transportation analysis and design tool. “In a city setting, it is not just about somebody getting on a plane,” says Chappell.

“It is about them leaving their house, taking a taxi to the bus station, taking a bus to the airport, taking a shuttle from check-in to their terminal, and walking through the airport.”

Columbus, Ohio used InfraWorks 360 to help win the $40 million U.S. Department of Transportation “Smart City Challenge” this year. Autodesk provided the finalists in the competition with access to and support for the software to help communicate the design’s vision and intent.

“3D Software, Not Really Like CAD at All” Comments