Bisio breaks down the as-a-service model, the rollout of the SX10, and smart infrastructure.

We look for unfiltered insights from key folks in the geospatial industry, and the most recent INTERGEO exhibition and conference in Berlin was a prime opportunity to corner some of these folks for quick Q&As. One target was Ron Bisio, VP for Trimble’s geospatial division. This year Trimble has created several significant developments that have driven a lot of response from our readers. We asked Ron questions about those and other general subjects of rising interest.

An interesting guy, Ron began his studies with a BSc in cartography and geographic information systems, then earned dual master’s degrees in both regional planning and business administration.
While he’s involved in the business side of things, he is also dedicated to continued development of geospatial technologies, owing to his roots. Despite joking that surveyors might make fun of him for how long it takes him to set up a tripod, Ron really gets surveying and surveyors. And he understands parts of the big geospatial picture that a lot of us surveyors need a bit of help understanding and adapting to. 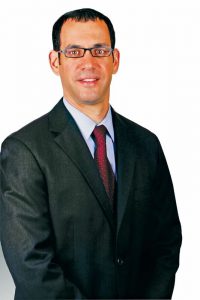 Gavin: When Catalyst was announced, we were skeptical. Could a software-defined receiver running on a smart phone really yield centimeter accuracy? A quick test drive confirmed the high precision (see our January 2017 story), but our readers and folks on social media had a lot of other questions, specifically about the “as-a-service” model. What did you have in mind when developing and launching this unique product and service model?

Ron: We wanted to support the way workforces do their jobs. And we wanted to get high precision into the hands of a lot more people— people who are now discovering the value of adding high precision to their workflows and projects. Look at the Esri Collector community, for example. This group is using mobile tablets and smart phones for doing field work with geospatial data, but they want better precision than what the phones [natively] provide.

Utilities provided a perfect example of the kind of industries we wanted to serve. These organizations often want to spin up a whole crew of people in the summertime to do asset inventory and inspections, but they don’t want to buy a bunch of receivers. While our GeoExplorer handhelds are excellent dedicated solutions, an organization’s budget may not allow them to purchase large quantities.
What they really might need is 10 receivers for year-round needs, but 50 more in the summer. So, positioning as a service lets them do thatÑservice on a monthly basis— and spin down those 50 when not in use. That actually matches how they want to use and buy technology.

Another option we wanted to provide in an as-a-service model was flexibility in precision. Users might be inventorying fire hydrants on one project and then suddenly have a need for centimeter or decimeter precisions while working on, for example, drainage inlets or [maintenance holes]. They can pay different monthly fees for different levels of precision. So, from a standpoint of when they want to use it, how long they want to use it, and what precision they want— all those things were variables, and we enable those with the as-a-service solution.

Gavin: The SX10 has been out for about a year. We were taken by surprise by a mini-deluge of positive feedback to our July 2017 feature on it. What has your experience been with the rollout?

Ron: It has been phenomenal. The thing I am most excited about is going on LinkedIn and Twitter and seeing what people are doing with it. We’ve seen it being used on the Monaco Grand Prix track, scanning Big Ben and the Houses of Parliament in the UK— so many great examples. There is a whole video montage running online of all the places it’s being used. The market has responded better than even we had expected, making use of the point clouds, imagery, and survey data all combined in projects.

Gavin: While researching that feature, I asked Stella Einarsson (Trimble system project manager for the SX10) about its future. She said that many of the features will simply become the way total stations work going forward, but I have also heard here at INTEGEO that the S series total station market is also staying strong.

Ron: We still have people who want the S7, obviously for their survey work, but there are people who might be doing bridge work or work in mines where they want to bring in the point cloud and images. These people are using the SX10 to improve the data for the project and clients and because they can grow their businesses by doing additional billable services.

Ron: A smart city will work only as well as the sum of its parts. We have a water division helping reduce leaks, an energy division working on outage management, and a railway division to help get people and goods in and out of a city. Think of a smart city as a smart electricity grid, smart water and other utilities, intelligent transportation systems, and more— all of that has geospatial data at its core.
When people ask me what our role is in smart cities, I say we are the ones measuring; we are the ones making sure things are built correctly and in the right place; and we are the ones who are then continuously monitoring.

You need to know if the improvements you are investing in are working and if they are having the desired impacts— that is what our technology does.