Subsurface utility engineering lies at the intersection of surveying and engineering. 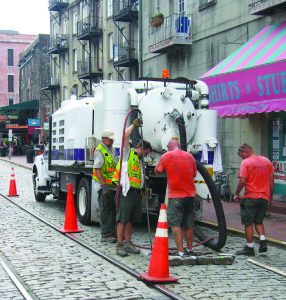 Over the years I have had many discussions with folks in the broader engineering and survey world about subsurface utility engineering (SUE) regarding both the practice and the terminology. One of the main discussions has been whether the practice aligns more closely with engineering or surveying and how the term “SUE” is most commonly utilized and understood by non-SUE professionals.

From these discussions, there seems to be more agreement that SUE belongs in the survey category as much if not more than the engineering category and the reasons are more related to how the terminology is utilized.

The primary reasoning appears simple: SUE, as it is most widely referred to and understood, is mostly a report on existing or as-built conditions of utility infrastructure with geospatial location measurements. There also exists an interesting subtext to the understanding of SUE, which is a misunderstanding (we’ll explore this, too).

First, there is no doubt that survey must be part of the SUE equation; without it, a utility map is nothing more than a picture, a “cartoon”, if you will. To achieve quality level “B” SUE data, in accordance with ASCE 38-02, the utility designations must be surveyed to applicable tolerances and depicted on plan documents.

Additional nuances must be considered, like project datum. A survey of utility designations doesn’t mean much if the survey doesn’t match the base datum for the project; it may be accurate unto itself but lacking relevancy to the project. These points are often mentioned and passionately expounded upon by the surveyors in our group.

One of the questions I hear most often revolves around the certification of the deliverable. Who signs and seals the final product? The answer largely depends on your geographic location. For instance, in Texas a SUE deliverable is signed and sealed by a professional engineer, while in Florida it is signed and sealed by a professional surveyor. Other states have an either/or option and, in some cases, dual PE/PLS certifications.

I have posed this question to colleagues down under (in Australia) and find that although they do not have a formal Òsign & sealÓ certification like in the USA, the subsurface utility investigation (SUI) work is required by many major entities to be overseen by a licensed surveyor.

This again looks at the deliverable to be sort of an “as-built” report wherein the existing conditions are geospatially measured and reported for use by an engineer in the design process. Their system also requires that those persons performing the utility designation/location work be certified by their national governing body, NULCA Australia, which is very different from the USA.

So, maybe the term “subsurface utility engineering,” as it seems to be most widely used, is a little misleading or requires further explanation. Nothing is being “engineered”. Instead, things are being measured and reported.

This idea holds true for the clear majority of SUE work throughout the USA, where SUE contracts rarely involve anything more than identifying, designating, and positionally representing the location of an existing underground facility. For these purposes, it seems the terminology used in Australia, “subsurface utility investigation”, is more accurate.

It also seems that it is nearly always a survey function. In every jurisdiction I know of, reporting the geospatial location of anything – in this case, a utility as it relates to a boundary, property line, right of way, easement, etc. – requires the certification of a licensed surveyor. 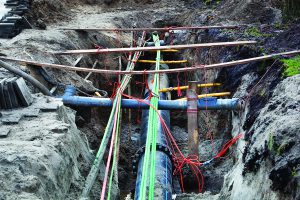 So, SUE, as the term is most widely utilized and understood, is a mapping of the utility infrastructure, and, since mapping is the realm of the surveyor, why does SUE not belong solely to survey? Several states allow licensed engineers to perform certain survey functions, so why canÕt surveyors provide SUE functions?

In many jurisdictions, engineers can perform survey functions if those functions do not involve platting or the establishment or re-establishment of boundary or right-of-way lines or require legal descriptions indicating the specific location and boundary of real property. All this considered, an accurate map of existing subsurface facilities can be created only if it is surveyed and plotted or reported in a specific set of coordinate values that will correctly align or interface with the proposed site plan or engineering drawings.

So why do we call it SUE and why the need for an engineer? Certainly, if anything more than a geospatially accurate as-built report is required—such as the design of a new utility, the analysis of a conflict, or the space available for a new facility, a relocation design, a cost estimate, or a condition assessment—then an engineer must be involved.

However, it is important to understand that surveyors measure and report the geophysical position of objects that can be seen. In terms of utility infrastructure, those objects are things like valves, hydrants, meters, risers, hand holes, vaults, manholes, pedestals, cabinets, poles, etc. These measurements are performed to exacting standards and are generally accurate to within 0.2Õ horizontally and vertically.

The engineer becomes important to the equation when the interpretation of unseen utility designations is added to the survey. The engineer is responsible for those interpretations and must base those interpretations on knowledge of buried utility systems, utility components, and the construction thereof as well as a level of understanding for the geophysical detection processes utilized to designate the location of these unseen systems. 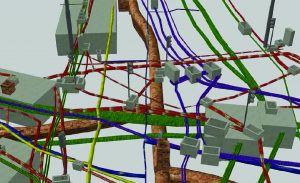 An example of a 3D SUE deliverable shows the complexities of mapping and displaying underground systems.

Bearing all this in mind, would it be more correct to consider SUE to be the intersection of engineering and surveying? SUE is the practice area where engineering professionals and geomatics professionals must intersect to derive the desired result: a geospatially accurate depiction of the utility infrastructure.

Nevertheless, questions remain as to which profession is more proper to house the practice of SUE. Would it be more correct to utilize a model like Australia and Europe wherein subsurface utility investigation is performed by a surveyor, and engineers are engaged to perform design, conflict analysis, and conflict resolution?

Very recently, I had the pleasure of interfacing with surveying professionals in Nigeria and South Africa, and I learned that Africa follows a nearly identical path to Australia. Subsurface utility investigations are entirely overseen by a surveying professional, and engineers are tasked with handling the design analysis after receiving the data from the surveyor.

Perhaps SUE should be viewed as an available practice area for both the engineer and the surveyor who can demonstrate competency in the necessary areas: engineers competent in the required survey elements and surveyors competent in the required interpretive elements. Either practitioner signing and sealing a SUE deliverable is likely accepting some level of responsibility beyond the normal area of their licensure.

Certainly, much like the engineers who design subsurface systems, many surveying professionals have provided as-built services for utility systems and are familiar with utility construction and the components of utility systems. It is reasonable to believe that surveyors with demonstrated experience in utility surveying and utility designating can competently attest to the validity and accuracy of a SUE deliverable. To me and many of my colleagues, there is virtually no reason why a properly licensed and experienced geomatics professional cannot certify a SUE deliverable in any jurisdiction.

It is important to understand that SUE is more than an engineering practice, more than a survey practice, and more than a geophysical practice. SUE is the intersection of all these technical disciplines. The key to a complete and proper SUE deliverable is knowing and understanding what the end user of the data requires and involving the proper professionals to deliver the information required.

Recognizing and utilizing the expertise of the surveyor and the engineer, and consulting a geophysicist if needed, will provide the best opportunity for a highly accurate deliverable.