This entry is part 3 of 13 in the series GeoDude

Above: A “new-user” 1-person firm scanned this complex historic building in five hours with 75 set-ups of the BLK360 and created final drawings. Credit: Southwest Scanning.

Almost everyone is familiar with splashy announcements of new products. For much of my career with Trimble and with Leica Geosystems, I personally drove many product introductions, so I’m tuned into them. (For the record, I had zero involvement with this one.)

In the world of laser scanning, one of the splashiest announcements in recent years was the November 2016 pre-availability announcement of the very small (1 kg) and inexpensive (<$20k) Leica BLK360 scanner at Autodesk University in Las Vegas. The Autodesk aspect included an optional Recap Pro scanner interface with point-cloud registration using an iPad Pro.

Based on my experience a big splash is one thing, but if you want to know how things are really going after initial bugs are sorted out—where new products are finding their best applications and types of users—it’s best to wait until the dust settles and then dig in to find out. That’s what I did for this article, as the BLK360 has been shipping for about two years now.

Two types of organizations have been buying BLK360s. One type is already well into laser scanning; the second type is virtually brand new to it or at least new to using it themselves.

Talking with those who had already been into laser scanning, it’s clear that they’ve been adding the BLK360 as another tool in their kit to use for certain applications. For these users, without question, the applications and types of projects where it’s being successfully used are most often driven by its small size (4” diam x 6 ” high) and weight, i.e. its form factor, compared to other scanners. Its ability to be easily raised up, to fit into tight spaces, and to be easily carried by someone all play into its primary uses.

For those users new to scanning, including many smaller contractors and architects, a big attraction was a new level of affordability combined with performance specs (60m range, max; point accuracy of 6mm at 10m range, 7mm at 20m range) that could potentially meet various application needs, typically capturing small building spaces and structures for revamp design and planning input. Another initial appeal for newbies is “easy to learn” via one-button operation.

Small in Many Ways

As I was researching this BLK360 topic, the word “small” kept coming up, from the scanner itself to the physical places and types of projects where it’s being used, and even to many of the new organizations buying it. 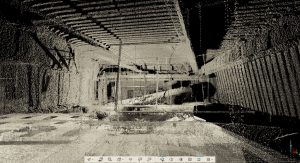 Specific applications where the BLK360’s small, lightweight form factor is proving beneficial include:

• nooks and crannies in industrial or power plants, and

• inside certain types of storage tanks or vessels.

These are spaces where it would be hard to carry and/or place a larger, higher-end scanner.

Unfortunately, the BLK360 also has a bit of an issue for some of these very same applications: it doesn’t do well capturing objects that are very close (<2’) to the scanner. In such cases, scan noise/fuzz can be excessive, or an object’s scan may simply look strange. From a practical standpoint, users try to work around that aspect or they just live with it if there aren’t better alternatives.

Another interesting form factor application for the BLK360 is marketing. It’s easy to throw in a backpack with an iPad Pro, so marketing staff (and business owners themselves) use it for marketing their services and showing what scanning can do. You can display scan results on the iPad Pro as scanning progresses; for many potential clients who have never seen laser scanning, it’s a jaw-dropper that quickly shows the value of scanning. 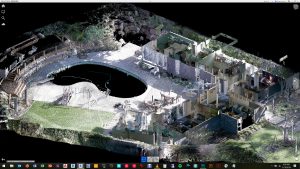 For some common residential remodel projects, the BLK360 is being successfully used for as-builts. Credit: Precision Property Measurements, Inc.

Some of the above applications not only describe spaces with a small or hard-to-reach access, but those spaces are also small unto themselves. Such “relatively small spaces and structures” are often the main application domain for many brand-new users. Here, we’re talking about relatively small buildings and small- to mid-sized rooms, not high-rises and not full exhibit halls or stadiums. 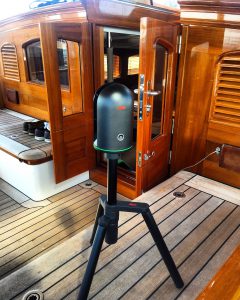 As-builts of spaces for boat refits are another viable BLK360 application. Credit: CaptureRI.

BLK360 users report that their typical project sizes are also relatively small, within the context of the world of laser scanning. Typical projects are in the 5-80 scans-per-project range. Although the scanner has up to 360,000 pts/sec speed, with a typical imaging-and-scan time of only about three minutes, its practical useful range, data-storage capacity, battery life, and data-download times don’t necessarily provide the high overall production efficiency that higher-end static scanners or mobile scanners can provide.

The BLK360’s breakthrough price point and one-button operation have naturally drawn strong interest from an entirely new layer of prospective users where affordability had been a prior entry barrier. The broader market has also benefitted from significant marketing exposure to scanning via Autodesk. As a result, today, one-person businesses are noticeably more common among the BLK360 user community than they had been for users of traditional higher-end scanners. A couple of new users I spoke with had already added complementary hardware and software after they got into scanning via their BLK360 purchase.

While many new users have entered the market via BLK360 (thereby also expanding end-client exposure to laser scanning), that rapid growth and influx hasn’t been without its own set of challenges.

Unlike large civil infrastructure applications where, over time, laser scanning has often replaced conventional survey methods, in most cases the BLK360 is replacing manual tape measure and sketch pad measurement. In some cases, it’s replacing the use of handheld distance measurement lasers. As such, it’s reaching a broader user base, typically not as high-end as surveyors or some other specialists in the spatial measurement community.

Foremost among challenges for new users is learning to become good at scanning. As anyone who is successful at laser scanning knows, success is a lot more than just owning a scanner. It’s also about learning how to register scans accurately, which is easier for some professionals than for others. And it’s about learning how to effectively process scans into final deliverables, of which there are myriad possibilities.

A sharp increase in the number of new users dealing with workflow challenges in turn puts an increased strain on support and training resources. That can be problematic for both users and suppliers of support and training. Note that one source of relief for support is the online Laser Scanning Forum (laserscanningforum.com). It has long been a helpful resource for newcomers (and veterans) for specific technical issues and questions that users have for any type of laser scanner and related software. Posts there—just for the BLK360—now number over 1,000.

The final challenge for some newbies is also learning how to be good at the business aspects of scanning. That includes successfully marketing your services while simultaneously getting your arms around the often-unplanned costs and learning curves of various software that may be needed to create all those wonderful deliverables.

In general, lots of new users is usually a very good thing, and there are many successful ones for sure, but it’s not an entirely pain-free world out there right now.

Much of my role during my years in the laser scanning market was interacting with experienced users. Several contacts for inputs for this article were with such users. Maybe “spoiled” is not the right word, but it was clear that some users who have experience with higher-end scanners have been frustrated to varying degrees with some performance aspects of the BLK360.

For example, it doesn’t do particularly well picking up black surfaces. All scanners have challenges with black surfaces, but some higher-end ones are much better at it than a BLK360.

Likewise, some of those accustomed to removable media data transfer from their scanner can get frustrated having to wait for the BLK360’s WiFi download. And, the BLK doesn’t have a proper dual-axis compensator, so vertical orientation, if needed, involves a workaround.

Of course, when such users are reminded of the BLK360 price compared to what they paid for their high-end scanner, they pretty much all stop complaining, and they recognize that the product announcement did indeed deserve its big splash.