This entry is part 11 of 12 in the series GeoDude 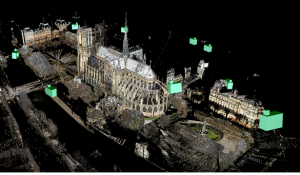 In my last Geodude article, I drew an analogy between surveyors (especially those involved in laser scanning) and musicians. I described how a user’s talent plays at least as big a role in the tasks performed as the quality of the instruments/tools that each professional uses. In many cases, talent plays the biggest role.

Here I describe surveyors and related professionals in another artistic role: movie making. However, I’m not simply making an analogy. Based on my industry experience, movie making is an increasingly important and valuable business activity for surveying and related professionals involved in laser scanning and UAVs/drones. And, surprisingly, these kinds of movies are not that hard to make.

The movie enables the viewer to observe the scene on a continuously moving basis from viewpoints that the movie maker has chosen to include in the movie. The moviemaker can choose to “pause” at various points of a fly-through to more closely examine a particular element of the scene, to pan from that spot, or to speed through various elements of the scene. The moviemaker has total freedom of how to fly through a scene.

In the big picture, movies are simply another type of deliverable. They join maps, plans, 2D and 3D drawings, tables, 3D models, photos, panoramic scan images, ortho images, etc. as candidate elements of surveying and mapping activities. Over my more-than-20 years of involvement in the laser scanning industry, I witnessed movies become an increasingly common and important output from projects that include laser scanning.

Movies are most often used in two areas: marketing and as a project deliverable.

On the marketing side, movies are commonly used for general marketing of an organization’s services and capabilities. Many organizations that offer laser scanning services today create laser-scan movies and place them on their organizations’ websites. Just as a “picture is worth a thousand words,” movies can be worth even more.

One of the benefits of 3D laser scanning is being able to view scenes or sites from viewpoints or perspectives that someone walking a scene or site cannot otherwise see. Often those additional viewpoints or perspectives can provide valuable insights for the viewer/client. A scan-based movie is a great way to showcase that capability, plus it gives viewers a more detailed and comprehensive feel for the scene or site—and for the service provider’s capabilities.

Scan- and scan-and-3D-model-based movies are also used as marketing aids to help service providers on specific project proposals. Such movies communicate to the client that the service provider has a more comprehensive understanding of the site/scene before starting a project.

When I ran the Leica Geosystems HDS Worldwide User Conference, I saw many such movies as part of conference presentations. In one, a large engineering/construction company bidding on a major plant retrofit project went to considerable lengths (and cost) to create a movie as part of their client proposal. The movie was based on scans plus 3D computer models of the facility. It showed in detail the company’s design plans and their sequenced construction plans. The company won the project, and the client later said that their movie played a large role in the award, as it showed how in-depth the company understood the project challenges and their carefully considered solutions.

While this was an extreme case, I’ve seen a dozen such movies that were made on a far lesser scale that were successfully used to help secure project awards. They include scan-and-model based movies made for planning commission and public reviews of proposed projects. As project deliverables, I’ve heard countless laser-scan service providers tell me how their clients appreciate when they’re provided with a fly-through of the project. In many cases, clients have then requested fly-throughs as part of their next project deliverables. 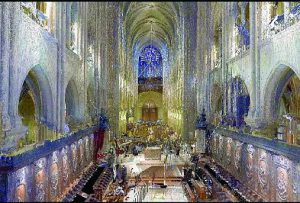 Granular effects like the above scan image of the Notre Dame scan can be smoothed using advanced techniques to make it look like the image below. Credit: Leica Geosystems 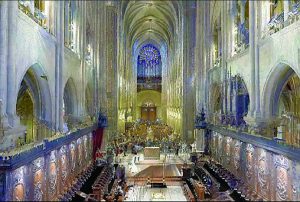 How to Make Scan-based Movies

Making such movies requires using office software designed specifically for the task. In the world of laser scanning, many point cloud software packages include movie-making modules. The process of creating scan (and 3D model-based) movies is surprisingly simple, although the task of making them at very high quality and optimized for maximum viewer impact often requires additional effort and sometimes additional software.

The user starts with a registered scan of the site/scene. Then, in the office, the movie maker—usually in cooperation with project or marketing staff—creates a virtual “camera path” along which a “virtual camera” will travel/fly through the scene.

The last step is to establish how fast or slow to move the virtual camera along its travel path. There are often parts of the scene where it’s most effective to slow down and dwell on a particular part and, likewise, where it’s best to fly quickly through.

One of my favorite scan-based movies that demonstrates the “slow-down” and “speed-up” aspects well is on a U.S. National Parks Service website: a virtual tour of Ellis Island and its large hospital, including interior scans that show damage from storm Sandy. You can access the movie via the website (nps.gov/hdp/ exhibits/ellis/Ellis_Index.html) and its movie camera icon for the hospital fly-through or via YouTube.

Advanced movie making involves minimizing flashing and moire pattern effects, controlling file size (files can often be quite large, e.g. several hundred MB), and smoothing out movements for the viewer. Typically, an organization’s point-cloud software specialists are the ones who make such movies.

Just like scan-and-3D-model-based movies, drone-based movies are used both for marketing purposes and client deliverables.

Here, the key is to establish a flight path and camera orientation that is optimized for movie viewing. I’ve seen such movies used widely for real estate marketing where it’s helpful to have aerial views of a property and surrounding properties for context.

Unlike making scan-based movies, once you’ve flown the drone, you’re “stuck” with the movie that’s been captured. You can edit it, but you can’t change the viewpoint of the images without flying the drone again. However, the plus of drone movies is their video realism.

Whether you make movies using scans, 3D models, 3D meshes, or drones, movie-making skills are becoming increasingly important and valuable to surveyors and related professionals. Making such movies leverages both the technical and creatives sides of the profession. Plus, they can be fun to make. 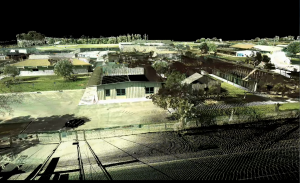 Merged laser scan and 3D model-based movies have proven to be excellent communication tools for project proposals, such as this campus development proposal. The image above is a frame from the “here’s what’s there today” laser scan part of the movie. The image below is a frame from the proposed design part of the movie, inserted into the 3D scan of the site. Credit: Precision Engineering. 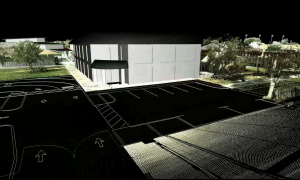